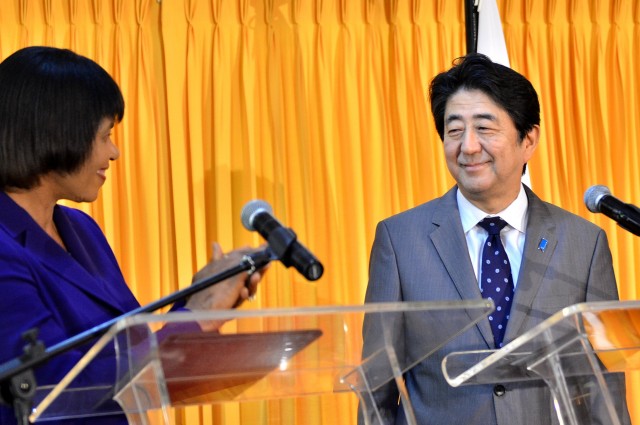 KINGSTON, Oct. 1 (JIS): The Government of Japan is providing $57 million in grant funding to Jamaica for improvements at the Institute of Jamaica (IOJ), including the procurement of audiovisual equipment and upgrading of exhibitions.

Prime Minister, the Most Hon. Portia Simpson Miller, and her Japanese counterpart, His Excellency Mr. Shinzo Abe, signed the funding agreement on Wednesday (September 30) at Jamaica House following bilateral talks.
Prime Minister Abe was on a one-day official visit to the island.

Mrs. Simpson Miller, in providing details of the talks, informed that a Memorandum of Understanding (MoU) was also signed to promote educational cooperation between the University of the West Indies (UWI) and Japan’s Sophia University.

She said that Jamaica is also set to benefit from a new technical cooperation project in the field of energy efficiency and renewable energy.

“We do not take lightly, this important contribution by Japan to Jamaica’s economic and social development,” she said.

She noted that the countries share over 50 years of diplomatic relationship and the assistance being provided will enhance cooperation at all levels.

“We recognise the importance of promotion of exchanges in a variety of areas such as sports… academic exchanges and Japanese language education,” he pointed out.

During the bilateral discussions, strategic dialogue was encouraged between the Jamaica Promotions Corporation (JAMPRO) and the Japan External Trade Organization as well as the private sector organisations of both countries, in order to promote Japan-Jamaica business and investment.

During his visit to Jamaica House, Prime Minister Abe signed the guestbook and gifts were presented and exchanged between the two leaders.