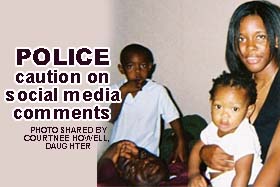 Providenciales, 15 Sept 2015 – Police classify the death of Rev Dr. Conrad Howell as ‘a suspicious death’ and expect to have the autopsy by as early as Wednesday.

A press conference was held on Monday afternoon called mainly to quell the swirling rumors about how Howell died; many of the speculative and unsubstantiated reports on social media were quite crude.

Acting Commissioner, DCP Rodney Adams confirmed that by the end of the year, the Police Force hopes to have a full canine unit. Currently, there is only a dog trained to detect narcotics.

During the Premier’s Press conference Saturday, he called for the British, who are responsible for national security to do more to help in solving major crimes.
During that Police press conference it was denied that there were gunshot or knife wounds to the body of Conrad Howell, who was found about 200 yards away from his home in Blue Mountain, with the assistance of a civilian dog. Oscar and his dog, Cocoa, continue to be hailed as heroes.