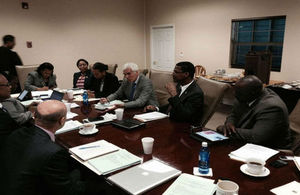 Those appointments include that of Captain Harold Williams to Deputy Chairman of the TCI Civil Aviation Authority Board. Williams will hold that post for one year.

Norman Hamilton joins the National Insurance Board as an Employer Representative for one year. While, Naysia Missick was appointed to the post of Collector of Stamp Duty in accordance with the Stamp Duty Ordinance.