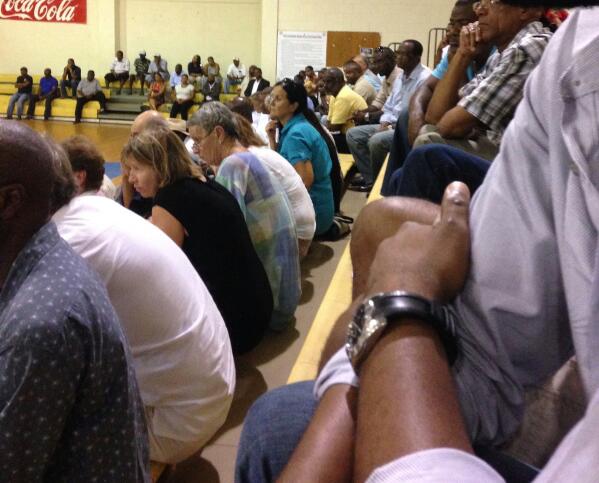 Providenciales, 13 Aug 2015 – During that meeting where the public was invited to give their comments on the idea of a 12 or 14 storey resort development along Grace Bay, Premier Rufus Ewing agreed that his administration must ensure that TC Islanders are not left out of job and business opportunities.

Though the meeting was led by Finance and Investment Minister, Washington Misick, the country’s leader and former Tourism chief shared that it is a factor under serious consideration but a firm policy that he and his team have not yet devised. Some natives said they are not anti-development but they are vexed at seeing Grace Bay developers be the biggest or the only winners when these projects are launched. The Premier was challenged to change the narrative so that more and more Turks and Caicos people could more directly profit from the vacation investments within the country.

The Administration was also slammed for having already made up its mind about the project; some felt the gathering and petition for comments was a sham. One person attending the meeting and speaking out also called on the PNP Administration to hold a town meeting to deal specifically with these issues of empowerment of Belongers; and turned his attention to the expatriate community in the Gus Lightbourne Gym for that public meeting; demanding that they turn up in the same strong numbers when the talk turns to Turks and Caicos Islanders benefiting from more significantly tourism.