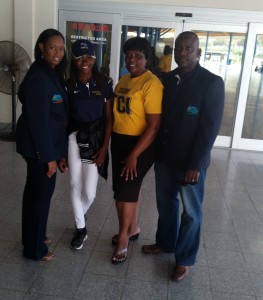 Providenciales, 14 Jul 2015 – For the first time, Turks and Caicos Islands has a young woman qualifier for the World Youth Champions and the athlete to make the historic cut is Akia Guerrier.

The Turks and Caicos Amateur Athletic Association (TCAAA) yesterday announce that Akia Guerrier is the first female athlete to make the qualifying standards and will be representing the Turks and Caicos this July at the Championships in Cali Columbia, the Pan American Junior Games in Edmonton, Canada and at the Commonwealth Youth Games in Samoa in September.

Akia and her coach, Randy Ford and chaperon, Rosalie Ingham-Hall, General Secretary of the TCAAA left yesterday morning for the Youth Championships. On hand for their departure was TCAAA President, Edith Skippings.