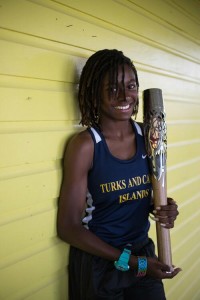 Providenciales, 18 Sept 2015 – The Minister of Sports, Hon Akierra Missick at the House of Assembly meeting congratulated two outstanding athletes who represented the TCI abroad in track and field.

Ifeanyi Otuonye, broke his own TCI national record again in long jump and set a new record in the indoor triple jump breaking his last record. Otuonye was recently honored by the US Track and Field Cross-Country Coaches Association as the ‘Midwest Field Male Athlete of the Year. The Minister encouraged him to go for gold.

Akia Guerrier was also hailed as an outstanding athlete and competed on behalf of TCI in Samoa where Akia smashed an over 20-year national record in the 200-meters with a time of 25.14 seconds; this record was held since 1993 by Rosalie Hall.