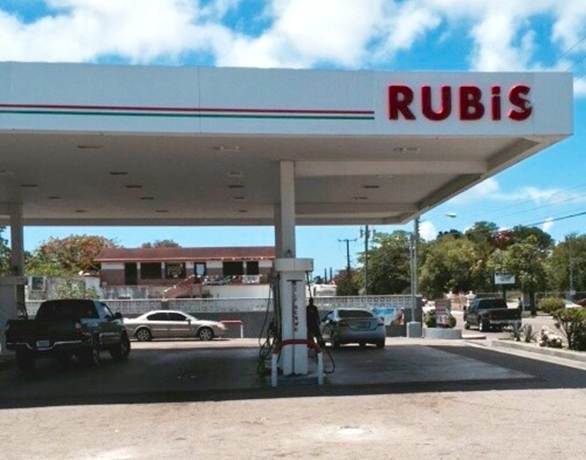 The Bahamas, 23 Jun 2015 – A leading environmentalist has called for a full investigation into a third suspected fuel leak from a Rubis station in New Providence.

Ecologist & Attorney Romi Ferreira, a director of fast-growing social and environmental movement Save The Bays (STB), said highly toxic and environmentally destructive substances may have leaked, or may be continuing to leak into the ground at Porky’s Service Station on East Street South.

“What seem to be test wells, some perhaps recently drilled, along with mobile recovery tanks can be observed at the station,” Ferreira said. “It would seem they are attempting to recover whatever spill material is in the ground – whatever hydrocarbon it is, either gas or diesel – as part of an ongoing exercise.

“This is precisely the same methodology that Rubis used at Marathon, they installed similar types of test wells and a recovery system utilizing the same types of tanks. In fact the tanks can be observed as a part of the soil vapor extraction system Rubis currently has running in Marathon, on the property of a resident who lives at ground zero of that disastrous spill of 24,000 gallons of gas.”

In the Marathon case, public awareness was raised about the grave health and environmental dangers associated with the leak, but only two years after residents were exposed to harmful, cancer causing chemicals.

Ferreira said the recently revealed Sandyport case, and now this East Street South example, force Bahamians to ask how many other leaks have managed to elude public scrutiny.

“How many families are being slowly poisoned without their knowledge, while fuel companies and the government maintain their silence?” he asked.

“Not only do these leaks point to a culture of poor environmental stewardship, they also speak to a fundamental lack of transparency and accountability on the part of both the company or companies involved, and our elected leaders.”

Ferreira said it appears that Rubis and the government learned nothing from the Marathon case, and insisted Bahamians have a right to know when their health is being placed at risk.

“Fuel companies and the Ministry of Environment have a duty to make residents and businesses aware of what they know, as soon as they know it.

“This is what happens in other jurisdictions around the world. Why are Bahamian lives considered less important? When will our government officials take environmental pollution seriously and move to protect us from its serious consequences?

“As with the Sandyport case – which itself only recently came to light through the efforts of concerned residents and businesses – STB calls for a full and open investigation of the situation at East Street South. What’s more, the people whose lives and livelihoods may be affected by this third possible leak should be informed of what the company and the government know immediately.

Test wells at Porky’s“Further, we call for increased attention to be placed to the physical state and integrity of all facilities and infrastructure that stores or transports fuels and other volatile hydrocarbon substances throughout the country.

“The time for playing hide-and-seek is over, government officials and fuel companies must come clean about any possible dangers to the public health and the integrity of our environment. They cannot be allowed to play with people’s lives.”

Related Topics:environmentalistsleakrubisSave The Bays
Up Next

MSMEs In Jamaica And Uk To Benefit From Mou