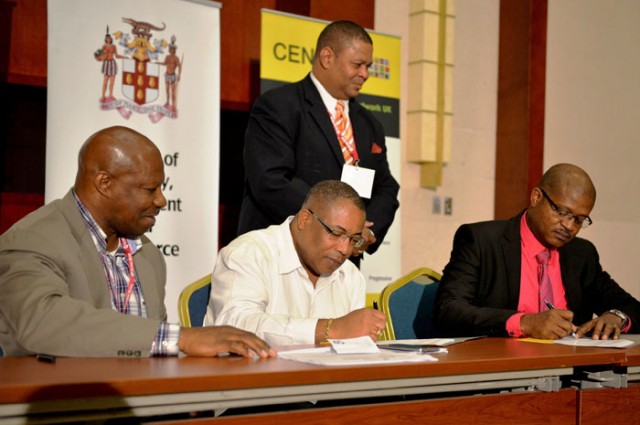 MONTEGO BAY, June 22 (JIS): The Micro, Small and Medium Size Enterprise (MSME) sectors in Jamaica and the United Kingdom (UK) are to benefit from a Memorandum of Understanding (MoU) signed by the MSME Alliance and the Caribbean Enterprise Network UK (CENUK).

The MoU, which represents a three-component arrangement – the creation of a marketplace; the creation of value; and the provision of mentorship for MSME businesses in Jamaican and the United Kingdom, was signed during the
6th Biennial Jamaica Diaspora Conference, held at the Montego Bay Convention Centre in St James, between June 13 and 18.

President of CENUK, Dennis St. Bernard, said the MoU has a five-year lifespan, during which the development of MSMEs in Jamaica and the Diaspora in the United Kingdom will be facilitated through a networking, upskilling and capacity building arrangement between the two MSME-incubator companies.
CENUK, which is a 95 per cent Caribbean -led company, is based in the UK, while the MSME Alliance operates as a development company in Jamaica and the wider Caribbean.

Mr. St. Bernard described the signing of the MOU as “timely, as local SMEs are struggling.”
“Therefore, we are very excited (to be) holding hands with (them) and taking them through this transition, because we ourselves have been through this painful period in Europe… getting access to capital. So, we can bring all that expertise to the local market.”

CENUK, which is already operating in the Caribbean, was instrumental in bringing a Nigerian company to Jamaica, where it has invested more than US$300 million, recently.

“They are already training people, working with about 50 to 100 employees. This is the type of collaboration we would like to see going forward,” Mr. St. Bernard said.

For his part, Industry, Investment and Commerce Minister, Hon. Anthony Hylton, lauded the MSME development partnership, noting that MSMEs have a critical role to play in engendering growth in the country’s economy.
He cited the importance of mentorship to capacity building in the sector, adding that “we recognise that we need to do a lot more work.”

“This is the area in which people who are successful at building businesses in difficult environments would want to take their experience and expertise into (the Jamaican) marketplace. Mentorship will go a far way to benefit MSMEs, both here in Jamaica and those in the UK,” the Minister said.

Premier speaks his mind on Police and Crime