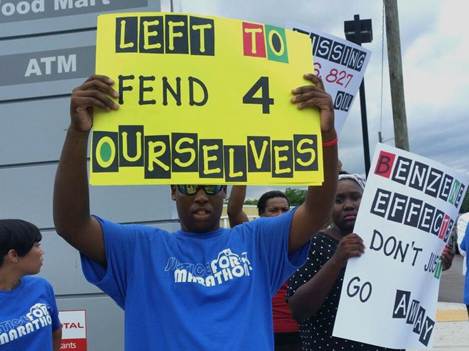 Lending her support to last week’s protest by Marathon residents outside the station, Haley-Benjamin, CEO of fast-growing social and environmental movement Save The Bays (STB), said authorities were wrong to tell residents they have nothing to fear from the toxic chemicals to which they were exposed for upwards of two years, as medical tests are far from complete – and likely to be less than conclusive when they are.

“The release of these premature results is unfortunate,” she said. “The government clearly jumped the gun. In reality, there is no satisfactory way in the short term to verify conclusively whether a person has been exposed to low levels of certain chemicals, for example benzene.”

Haley-Benjamin noted that according to Dr. van de Weerdt, toxicologist and consultant with the Pan-American Health Organization (PAHO), while the preliminary results may be encouraging, it remains important to establish a complete picture of the situation – both in terms of completing the health risk assessments and being in a position to reassure concerned citizens.

“The government should not be in the business of communicating simplified versions of this very serious situation to the public,” she said.

“With regard to the 223 persons tested, more information is required to understand the extent of the evaluations and if those tested are representative of both the original and possibly any newly impacted areas. To date, we know that 17,000 gallons of fuel have yet to be recovered from the ground. Over time, the impacted area will grow as the benzene spreads with the natural flow of groundwater.

“Residents of this area are very concerned for their safety – and rightfully so considering the known link between aggressive cancer and benzene exposure; and in light of the more than 20 recent cancer-related deaths in the area,” said Haley-Benjamin. “Exposure to low levels of benzene can result in chronic health effects and take a longer period of time to manifest. This underscores the need for long-term medical surveillance by a medical practitioner to detect abnormalities during early onset.”

Haley-Benjamin called for a full report of the investigation by the Department of Environmental Health (DEHS) and PAHO to be compiled and released to the public, and said officials should refrain from making any sweeping statements until such time.

She went on to stress STB’s full support for Justice for Marathon, the grassroots community group that organized last week’s protest, citing the lack of proper response to the leak by both government and Rubis, and the ongoing failure to fully address the concerns of residents.

Haley-Benjamin said STB’s call for stronger environmental legislation is also an effort to protect human health by either through prevention of hazardous pollution, or mitigation of the effects if such situations do arise. To that end, she called for the implementation of an effective response and public warning system for hydrocarbon leaks, and a comprehensive monitoring program for all fuel stations, in line with the recommendations in the report by consultants Black & Veatch, who were contracted by the government to evaluate the response to the Marathon spill more than a year ago.

Save The Bays CEO Vanessa Haley-Benjamin participates in last week’s protest, pointing out 20 recent cancer-related deaths in the area of the fuel leak.

In January 2013, it came to the attention of Rubis and the government that the Robinson Road station had leaked around 24,000 gallons of gasoline into the ground.

The resultant presence of strong hydrocarbon vapors and discovery of large pools of underground gasoline forced the station’s immediate neighbor, Cable Bahamas to evacuate its Customer Service Building (CSB) amid fears of health and safety issues for customers and staff. Eventually, more than 40 staff members had to be treated for exposure.
It has been confirmed that the leak led to the contamination of a wide area of groundwater, including the water supply to several homes and residents have reported a range of health problems.

For two years, Rubis and government officials were aware of the leak and the associated dangers, but failed to make any public announcements, sparking widespread outrage.

Since then, two further possible leaks at Rubis stations in New Providence have come to light. In the wake of the fallout from the Marathon case, both Rubis and the government appeared to take swift action. However yet again, they only broke their silence in response to concerns raised by members of the public.

Related Topics:bahamasrubisSave The Bays
Up Next