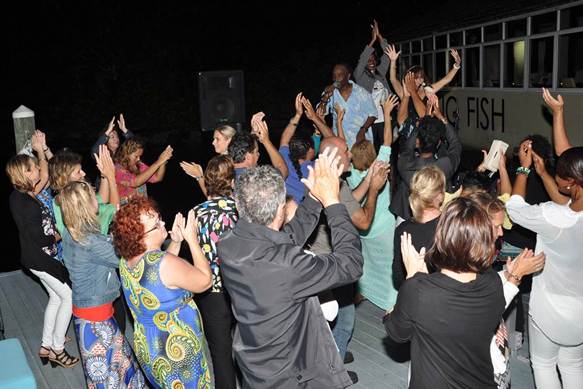 Grand Bahama, 04 Mar 2015 – Scores of people from every walk of life packed a concert this weekend hosted by Save The Bays, singing along with performers, dancing and helping to raise funds for the fast-growing environmental movement.
Organisers hailed the February 28 fundraiser, Chillin’ by the Dock of the Bay, a success.

The event was held at the popular Flying Fish Restaurant, home of Chef Tim Tibbitts, a Bahamian who returned to his roots after a successful performing career in Canada and is now ranked as one of the Caribbean’s 25 best chefs.
The concert brought five performers together with one common goal – protecting the waters of The Bahamas.
Musical artists included the jazzy Marina Gottlieb Sarles who performed with master guitarist Steve Persaud, Grand Bahama local favourites, Derek Gape,Tim Tibbitts, with the legendary Kirkland ‘KB’ Bodie headlining the event.
Guests were treated to an electrifying lineup. Sarles began the event with a smooth medley of songs, returning to the stage during Gape’s performance to sing her famous brother, Sir Cay Gottlieb’s song ‘Day Break’. Gape also had Tibbitts join him and Persaud on well-known ‘Lyin’ Eyes’ by the Eagles, before Tibbitts performed his own numbers, including crowd favourite, ‘Purple Rain’. The night’s highlight was a surprise duet by KB and Tibbitts singing the well-known ‘Journey’ song, ‘Faithfully’ shortly before guests hit the dancefloor to join KB to the tune of his hit, ‘Just Cause She Fat’.

“I am happy with the outcome and Grand Bahama will definitely see more events being put on by our organization,” said Save The Bays CEO Lindsey McCoy. “We want to do all that we can to raise awareness for our cause and I am happy that we were able to bring five passionate and talented persons to help relay that message.”
Funds raised will help defray educational, legal and operational costs of the organization that has filed several legal actions to hold environmental protection violators accountable and force remediation of damage caused by oil pollution or unregulated development.

“We wanted to host a fundraiser in Grand Bahama where Save The Bays’ impact, particularly in the education arena and among young Bahamians, has been so great,” said McCoy. “We did not want to do anything too formal or fancy, just something that represented what we are all about – preserving the waters for all of us to appreciate and for future generations to enjoy so what better place than on the waterfront.

“Every Bahamian should be aware of how important preserving and protecting our marine environment and our vast marine resources is,” said the Save The Bays CEO, “It’s the beauty of our waters that makes The Bahamas the amazing place it is.”

At the same time, Save The Bays has a need, she says, to raise funds to keep up the campaign, enhancing educational efforts and legal cases holding environmental best practices violators accountable.
Since its founding less than two years ago, the fast-growing Save The Bays organization has grown into a full-blown movement with the largest number of social media followers in Bahamian history.

More than 17,200 persons Like Save The Bays on Facebook and nearly 6,000 have signed a petition calling for a freedom of information act, an environmental protection act and an end to unregulated development among other tenets.

To connect with Save The Bays or sign the petition online, go to www.savethebays.bs