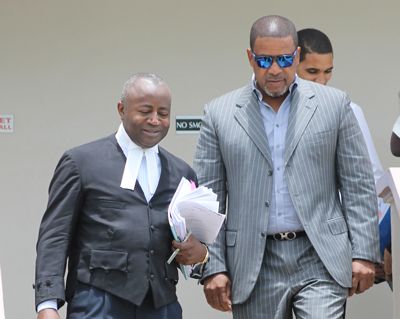 Providenciales, 13 May 2015 – In a matter of seconds to render the decision and with no need for a second day of hearing the matter, the Privy Council in London on Monday dismissed the case of Mike Missick, Floyd Hall, McAllister Hanchell, Lillian Boyce, Jeffrey Hall, Chal Misick, Melbourne Wilson and Earlson Robinson. The group was appealing a local ruling and maintained that there is no way Justice Paul Harrison could give them an impartial trial. F Chambers law firm with Andrew Mitchell gave a valiant effort and tried to prove, through a string other cases and scenarios that Harrison was prone to make a flawed judgment.

The eight defendants prefer a jury trial. The Privy panel listened, questioned and ultimately decided to dismiss the case after a morning and afternoon session; explaining that they would give reasons later. During the presentation by lawyers for Misick and others, Special Prosecutor Helen Garlick was present; she was keenly observing the proceedings at the Privy Council. It was explained that Garlick made the request for a trial without a jury for the group citing that the extreme publicity of the case would make a fair trial impossible if given to a jury to decide.