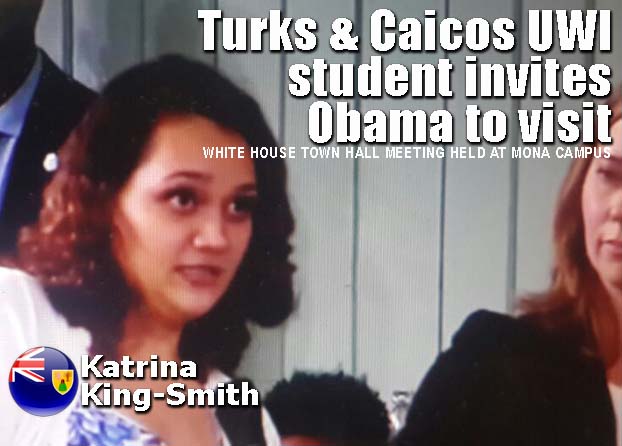 Providenciales, 10 Apr 2015 – Once he is done with his presidency, Barack Obama promises to go Caribbean island hopping and the Turks and Caicos makes the list.

Barack Obama, US President: “You know on the second question, absolutely! (laughs) I’ll do some island hopping once I am out of office and you guys can show me all of the good places to go.”

Big move for a Turks and Caicos University of the West Indies student when she is a part of the White House hosted town meeting at the Mona Campus in Kingston, Jamaica. Katrina King-Smith was selected out of scores of young leaders by US President Barack Obama to ask him anything; she challenges him on how smaller states can be and remain viable economies and invited him to come to the Turks and Caicos.

“My name is Katrina King-Smith, I’m from the Turks and Caicos Islands my question is two part as well. Firstly in countries such as the Turk sand Caicos Island where our population is small and our main sources of revenue are tourism and foreign direct investment, I was wondering if you can suggest two ways that the government may better generate and regulate sustainable revenue, especially with regulations currently being put in place to close off shore financial centers. And secondly, I was wondering if after your term has ended, would you mind coming to the Turks and Caicos to visit?”

Royelle Robinson is president of the Turks and Caicos Student Association at UWI and last night told me, “We are definitely proud of Katrina for representing us so well! One of our aims as an organization is to make the Turks and Caicos known and educate our fellow members of the University of the West Indies community about the lovely country we call home.” President Obama explained to Katrina and the students at the meeting held yesterday at UWI, that the same issue cropped up in his CARICOM heads of government session earlier.

Barack Obama, US President: “Operating in the United States, employing folks in the United States, essentially headquartered in the United States and yet somehow their mailing address is such and such island where they have to pay no taxes. Those are the kinds of egregious concerns that we are trying to deal with, I think we try to take it on a case by case basis and in my CARICOM meeting that I just had, this issue was brought up and there were a number of leaders who brought up that they were being unfairly labeled as areas of high financial risk. What I committed to them, is we will examine their complaints and go through, in very concrete ways, where our concerns are and how our governments can work together.”

Today, all of those CARICOM leaders and US President Obama are in Panama for the seventh Summit of the Americas; historic as it is the first time Cuba will join the caucuses. Before, as a Communist country, Cuba was forbidden to join those meetings.