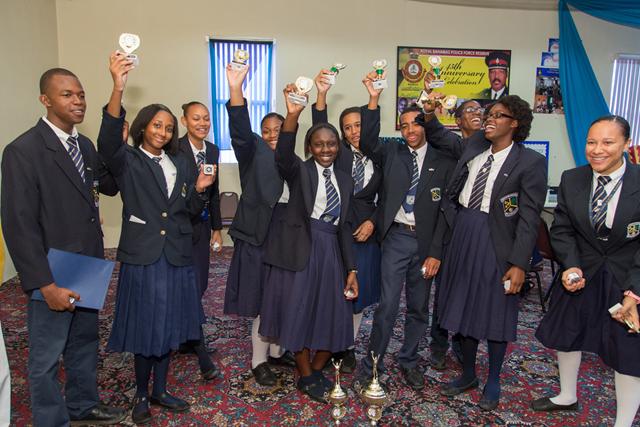 Grand Bahama, 27 Apr 2015 – More than 50 high school students entered this year’s Earth Day Challenge, some even travelled from Grand Bahama in the North and Long Island in the South, all in hopes of winning the coveted golden trophy – in the end, Bishop Michael Eldon High School secured both the first and third prizes.

The competition, now in its third year, is a product of ecologist & attorney Romi Ferreira aiming to encourage high school students to examine environmental issues while providing a platform for offering solutions. This year, for the first time, the American Embassy joined the team as well with members of their organization acting as judges.
Under the theme, “It Is Our Turn To Lead”, students presented projects on a number of projects on environmental issues including solid waste, renewable energy, pollution, wetlands, fresh water resources, environmental assessment and marine resources. Judging was based on the exhibits created, along with presentation materials and the written report provided.

“If we are good to our environment, the environment will take care of us and will be preserved for generations to come,” said Ferreira. “That is the message of this competition. It forces them to think of alternative means of sustenance. Once they understand that, they can change their mindset and those of others.”

Grand Bahama’s Bishop Michael Eldon High split eight students into two groups. One of them, presented a compost tea as a natural alternative to artificial fertilizers which garnered a third place trophy, individual trophies for students and iPod Shuffles. But it was the second team’s Aquaponics project that won the first place trophy, individual trophies, iPod Shuffles and an all-expense paid trip to the Plastic Summit at the Island School in Eleuthera.

Minister of Environment and Housing Kenred Dorsett was impressed by the projects produced and told students that the challenge was a unique opportunity to teach them how to be true leaders of their peers.
“I believe that participating in this environmental competition brought you benefits that you could never capture in a classroom,” said Minister Dorsett. “I’m sure many of you now have a greater appreciation for the environment, and understand some of the environmental challenges and issues our country faces every day.”
He went on to tell the youngsters that they were never too young to lead their peers, schools, communities and their Bahamian society.

The winning team managed to flush excrement from gold fish via a tube potted plants which were then supplied with water and nitrates, needed to grow before releasing the unused water, now purified, back to the fish tank.
Advisor to the Grand Bahama team Selim Dela Pena, said she couldn’t be more happy especially considering her team’s third place finish in last year’s competition.

“This is very important because you can see the ingenuity of students and their commitment to becoming better stewards of the environment, said the Physics and Chemistry teacher. “You want the young to take the lead.”
Last year’s winner, Aquinas College, took second place this year. Other participating schools included: Jordan Prince Williams, C.R. Walker, St. John’s College and N.G.M. Major from Long Island. All participants were given certificates of appreciation for their participation and reminded to continue to be leaders in innovative thinking.
“All of them worked hard and in my eyes they are all winners,” said Ferreira. “This is just the beginning of creating a more environmentally aware generation.”