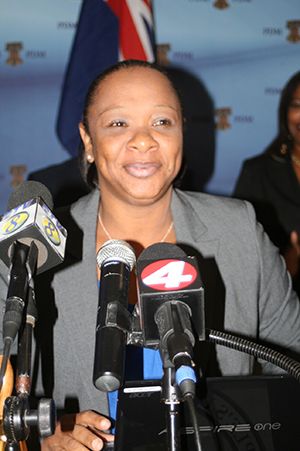 Providenciales, 20 Feb 2015 – The People’s Democratic Movement leader is among those criticizing the Premier for his press release yesterday. Hon Sharlene Robinson called for statistical evidence to the claims made by Rufus Ewing. The PDM leader labeled the statement as “weak and is meant to mislead our people in a staged one sided fight where he has everything at his disposal to correct the ills that he has just stumbled upon after two years.” Robinson said Premier Ewing has executive power and offered him a list of moves she believes he can make to see that islanders are hired and compensated. Hon Robinson suggests that there be a labour skills audit, that government install a comprehensive labour database, that the PNP Administration re-institute the understudy endorsement stipulation which she claims was abandoned under their government; there is a call to create a more effective Labour Department and Sharlene Robinson believes that government should stop the issuance of work permits as a revenue earner.

The Leader of the PDM also demanded to know the true unemployment rate and said another huge problem is underemployment. I quote her again:”It continues to pain us that students returning from Government sponsored studies overseas are often not employed in their areas of study even in the Public sector where vacancies exist.”