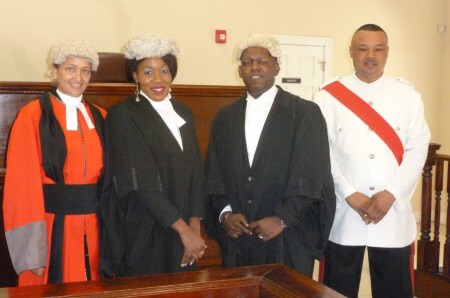 Providenciales, 07 Jan 2015 – The Turks and Caicos before Christmas welcomed its youngest member to the TCI Bar Council. Congratulations to Jerwina Princess Taylor. In Late December, 25 year old, Jerwina Taylor was admitted to the Bar of Turks and Caicos Islands by way of a Hearing, which took place at the Supreme Court on Leeward Highway. At the hearing, Taylor’s sponsor, George Missick a partner with Karam & Missick law firm explained that Miss Taylor had been employed with his firm for nine months and had undergone extensive training in various areas of law under his guidance.

Jerwina, who obtained her undergraduate law degree LLB in 2012 from Oxford Brookes University, then went on to get her diploma from the Oxford Institute of Legal practice in 2014. Her Ladyship, Chief Justice Margaret Ramsey Hale presided over the call and swearing in and according to her sponsor, Jerwina Taylor who is the first female native attorney to be employed at Karam & Missick, particularly enjoys litigation, employment law and Family Law.