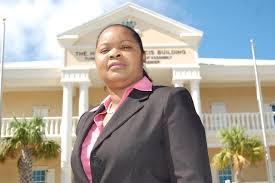 Providenciales, 13 Jan 2015 – The Governor’s Office is pleased to announce that Mrs Clara Gardiner, the Permanent Secretary of Border Control and Labour, received an OBE in Her Majesty The Queen’s New Year Honours this month. The Award was for Mrs Gardiner’s services to immigration issues in the Overseas Territories, and Turks and Caicos in particular.

Speaking about the Award HE The Governor Peter Beckingham said this week: “ I was delighted to read in the New Year’s Awards that Clara Gardiner was honoured with an OBE. I have seen a good deal of Clara’s work, not least when there have been the threats of illegal immigration from chartered sloops arriving in TCI. She is evidently a dedicated and resourceful member of the Public Service. Her Award is a tremendous recognition of the work that she, and many members of the Immigration service, do for Turks and Caicos”.

The Minister of Border Control and Labour, The Hon Don Hue Gardiner, joined the Governor in welcoming this Award. The Minister said: “I am thrilled that my Permanent Secretary has received this distinction . It is a great honour to her, the Department and TCI, and a mark of her hard work and perseverance in a challenging environment.”

Mrs Gardiner will be invited later this year to Buckingham Palace to receive the Award from Her Majesty or another member of the Royal Family.

The Governor and Jill Beckingham received a private Audience with Her Majesty The Queen last December.