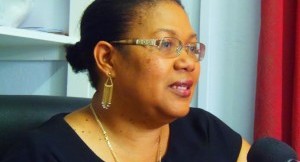 Providenciales, 05 Jan 2015 – On Monday, at the opening of the legal year for the TCI, the Attorney General, Rhondalee Knowles announced that she has a deputy now. Wynante Adrien-Roberts fills the void left when Rhondalee was promoted to the country’s first indigenous and female AG. Adrien-Roberts started work since Monday in the Chamber and hails from Dominica.

AG Knowles said her new deputy is a thoroughly qualified and experienced attorney having been solicitor general in Dominica for many years before moving to the private bar. Mrs. Adrien-Roberts will focus on training and development within the AGs Chambers. A drafter will also be hired in this first quarter; taking the number of legal drafters in the Legislative Drafting division with the Attorney General to four.