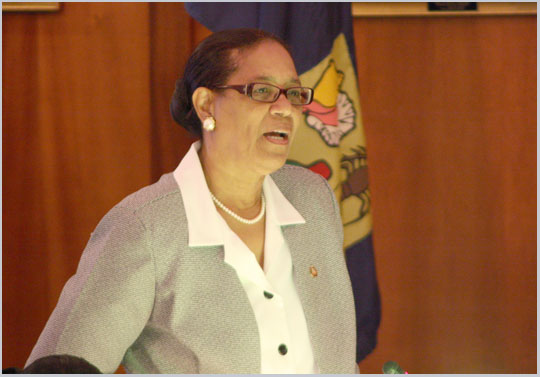 Providenciales, 28 jan 2015 – Governor’s Appointed member to the House of Assembly, Lillian Missick has suggested that the Legislative Prayer is enough and that the devotions and elaborate prayers of invited pastors at the opening of each meeting of the House of Assembly should be stopped. House Speaker Robert Hall said only that he will note the suggestion; that a decision on such a sensitive matter will not be made immediately. Yesterday and at other times, Pastors have been seen to be extreme in the timing they are given to admonish the Members on Christian principles. Pastor Ruth Ariza of New Beginnings Harvest Ministry yesterday slammed government on health care and employment for qualified Turks and Caicos Islanders.

Apostle Ruth Ariza: “Of which I’ve already got permission for; so on Friday coming it will be a day of prayer and fasting and I am gonna take this opportunity to invite our Honourable Premier. I have not put it in writing but sir I am extending an invitation to you on Friday, it is gonna be right in front of Parliament House, right in front of House of Assembly, outside. And I am gonna ask you to do a prayer for the Nation; a prayer of repentance and forgiveness.”

Apostle Ruth was preaching from the book of Esther.