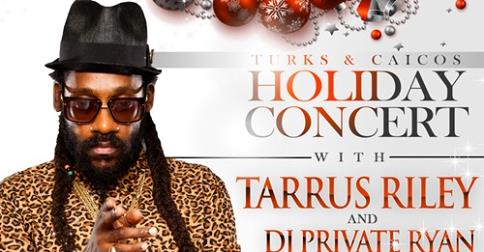 An American-Jamaican, Tarrus Riley is the son of the legendary Jimmy Riley; a famous Jamaican singer. He has toured the world with great giants of the music industry, like Dean Fraser.

Tarrus Riley has rocked the music industry with his albums…She’s Royal and Love Situation, each with over a dozen songs, including his greatest hit…She’s Royal. This song is heard on the lips of every age group!

This song will never die as long as the female specie is in existence….”She’s royal yeah, so royal….!”

His songs cater to all genres of people which create a warm and loving atmosphere. This man is a great entertainer and interacts with his audience which creates an electrifying ‘itch’ and penetrates the inner being with a tingling and lingering sensation.
Tarrus Riley is aspiring to be a legend like his father as he progresses to satisfy the world with his soothing reggae music!
Tarrus Riley will be here in the TCI on Friday, December 19th at the Grace Bay lawn with his great music to soothe his audience!