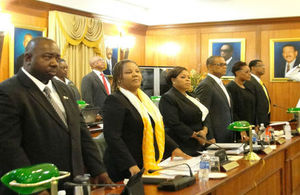 Turks & Caicos Islands, 30 Sept 2014 – Government plans to build a new fire station in Provo and is seeking a consultant to advise on the work…. TCIG also wants a contractor to refurbish the Raymond Gardiner High School science lab in North Caicos and this morning, in Long Bay Hills, bidders on the project to split CHHS met at the grounds.

Lots of tenders out now that the government’s budget is with money to spend… Education is looking for a company to bus students… a tender notice also issued for ambulances; last fiscal year there were to be purchased, three new ambulances… the country did not buy any because no one bid for the job; the new procurement process deemed a nightmare.

Nonetheless there is a tender notice for furniture and equipment for the new administrative block of the HJ Robinson High School in Grand Turk. Another would give an insurance company the job of insuring the entire fleet of government vehicles, third party, from October for one year.

Another capital works project from last year resurfacing… did not happen in 2013 due to insufficient funding… but Government Support Services hoping to get the Bambarra Slip in Middle Caicos extended for boat users… the Blue Hills dock which is splintered and falling apart is put out for contracted repairs… and hurricane shelter, the All Saints Missionary Church in Provo needs shutters.