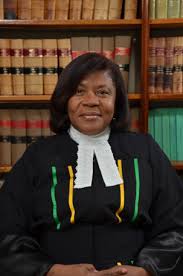 KINGSTON, Sept. 16 (Jamaica Informaton Service): Three additional courtrooms have been provided at the Supreme Court on King Street in downtown Kingston, increasing the number to 15.

They are located on the adjacent building at the intersection of King and Barry Streets, which formerly housed a branch of the National Commercial Bank (NCB).

The building was acquired and is being refurbished by the Ministry of Justice, under its multi-million dollar Justice Square Project, incorporating further development of the area in the Supreme Court’s immediate precincts.
The new courtrooms are currently being used for the 2014 Michaelmas Term of the Home Circuit Court. Work to develop the remaining four courtrooms is currently underway.

In her address at the start of the Michaelmas Term, today (September 16), Chief Justice, Hon. Zaila McCalla, said the new facilities will go a far way in resolving space constraints at the Supreme Court.

She pointed out that the Supreme Court’s administration no longer has to resort to alternatives, such as using the caucus rooms at the Jamaica Conference Centre, on Duke Street, for trial sittings.

The Chief Justice expressed the hope that the remaining courtrooms and supporting facilities will be completed in short order.

Meanwhile, the number of cases listed for trial during the Michaelmas Term, which lasts from September to December, has decreased by 14.06 per cent, compared to the similar period last year.

A breakdown of the list provided by the Office of the Director of Public Prosecutions (DPP) for this year shows 507 cases down for trial, as against 590 at the start of the 2013 session.

Senior Deputy Director of Public Prosecutions, Kathy Pyke, who gave a breakdown, said the majority of the cases for the Michaelmas Term comprise the 483 brought forward from the Easter session, with 24 new committals to bring the total to 507.

Mrs. McCalla said despite the relatively high number of cases listed, “valiant efforts” and have been and will be made to reduce the number of cases.

She appealed for the commitment and cooperation of judges, attorneys, and the police to ensure that cases, particularly criminal matters which dominate the list, are thoroughly investigated and prepared, and appropriately presided over to ensure that justice of the highest standard is dispensed.

The Chief Justice implored persons summoned to serve as jurors to respond accordingly to ensure that the judicial process is not stalled.

She also urged employers to facilitate their staff with the time to serve, once they have expressed a willingness to do so. The Chief Justice also thanked those persons who have served as jurors.