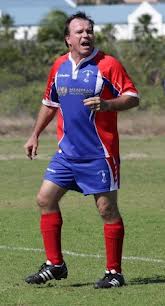 Providenciales – Meridian Bank and Trust, Managing Director, Keith Burant singing a different song in court this morning… no longer saying he is not guilty of obstruction; assaulting a police officer while executing his duties, using abusive language and resisting arrest but now saying he is guilty… and getting 30 days probation to maintain good behaviour and that’s all for confessing to those four charges stemming from the Queen’s Birthday Parade confrontation with members of the Royal Turks and Caicos Islands Police Force.

The row was over parking at the field, his rugby field where the honors parade was being held and where Burant was told to remove his vehicle which was said to be blocking the Acting Premier’s vehicle.