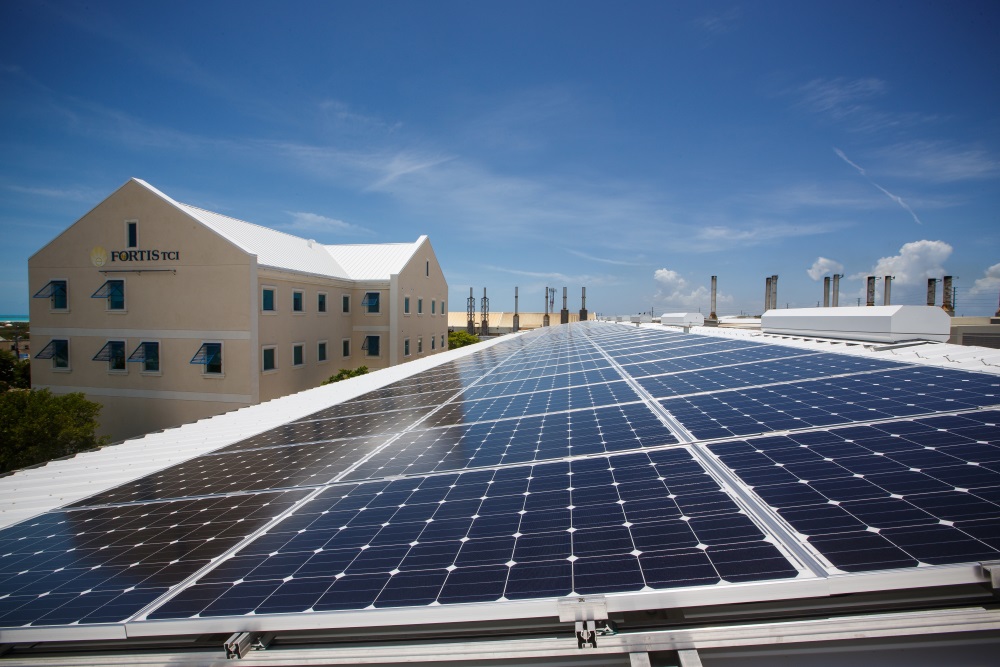 FORTIS TCI PRESS RELEASE
Providenciales, Turks and Caicos Islands (Wednesday, September 17, 2014) – A leading commercial and industrial engineering solutions company, Leidos Engineering, LLC (Leidos), recently completed a Renewable Energy Infusion Study for FortisTCI (FTCI), the energy provider in the Turks and Caicos Islands. FortisTCI President & CEO Eddinton Powell said, “We are now one step closer to understanding how and at what level we can integrate renewable energy into our electricity grid. We know that in the future renewable energy will play a role in the energy mix of the Turks and Caicos Islands. It is important that these studies precede any implementation so that we can make the best decisions for our customers, for the Country and the Company. No new forms of generation should reduce the safety and reliability of service, or increase the cost”

The study, commissioned in early 2014, was undertaken to determine the total capacity of intermittent renewable energy that FortisTCI can safely integrate into the electricity grid without compromising system stability.
The final report, completed in August 2014, focused on (non-base load) photovoltaic (PV), often referred to as solar, and wind distributed generation (DG) installations on Grand Turk and Providenciales. The study was limited to these two locations, as a result of the small size of the electricity systems on the other islands. The assessment included both utility scale as well as small capacity (for example, 3 kW) systems.

In the report, Leidos has made a number of recommendations. They include:
 Setting the upper limit of renewable DG, to a maximum of 4.15 MW in Providenciales and 0.34 MW in Grand Turk.
 Setting infusion of renewables on each distribution feeder to no more than the feeder minimum load to avoid system voltage issues.
 Prohibit DG on Grace Bay feeder five because of its impact on operating voltages, unless there are additional system upgrades or improvements.

These are just some of the recommendations made in the report. In addition, Leidos recommends, setting all consumer DG interfaced with the current grid, at existing individual demand (electricity consumption) or less.

The study went on to reveal that it is possible to achieve higher DG penetration, but only with significant investment and upgrades. The report read, “additional analysis is recommended to confirm technically and economically: 1) Altering the generation dispatch and (or) increasing the spinning reserve to provide more margin for system contingencies with DG. 2) Add substation and (or) line regulation to provide more voltage control of the T&D system and take advantage of the available capacity.” Additionally, according to Leidos all DG installations should follow already established international interconnection standards set by professional associations such as, The Institute of Electrical and Electronics Engineers (IEEE). Suggested standards include; IEEE 1547, IEEE 929 and UL1741.

FortisTCI is now working to position itself to accept customer-owned solar energy on the electricity grid by the
middle of 2015. In order to achieve this goal, it will require FortisTCI and the Turks and Caicos Islands Government to work together to set proper interconnection and metering standards.

Notes to Editors:
1) FortisTCI Limited (FTCI) became a wholly owned subsidiary of Fortis Inc. located in Newfoundland, Canada in August 2006. Turks and Caicos Utility Limited (TCU), which is the sole provider of electricity on the Islands of Grand Turk and Salt Cay, was acquired by FTCI in August 2012. FTCI is the sole provider of electricity in Providenciales, North Caicos, Middle Caicos, East Caicos and adjacent Cays, and South Caicos. Together the two companies serve approximately 13,000 electricity customers in the Turks & Caicos Islands. The Utilities have an aggregate diesel-fired generating capacity of approximately 75 megawatts. Additional information on FortisTCI can be accessed at www.fortistci.com.
2) Fortis is the largest investor-owned distribution utility in Canada, with total assets approaching $25 billion and fiscal 2013 revenue exceeding $4 billion. Its regulated utilities account for approximately 93% of total assets and serve more than 3 million customers across Canada and in the United States and the Caribbean. Fortis owns non-regulated hydroelectric generation assets in Canada, Belize and Upstate New York. The Corporation’s non-utility investment is comprised of hotels and commercial real estate in Canada. For more information, visit www.fortisinc.com or www.sedar.com.