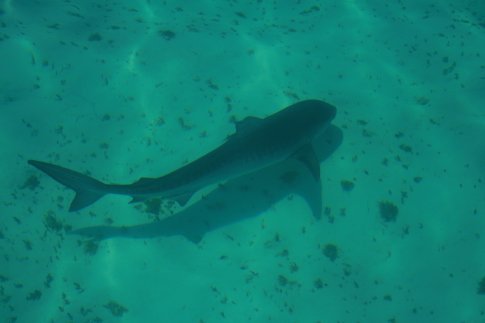 #TurksandCaicos, February 3, 2021 – For two weeks in January and February, a field research team from Beneath the Waves, a USA-based NGO, is in Turks and Caicos Islands.

The team, under Dr Austin Gallagher, is carrying out marine fieldwork for the project Diversity, Occurrence, and Habitat Use of Large Sharks in the TCI.

The project will be investigating the wild habits of large sharks including tiger sharks, Caribbean reef sharks, and nurse sharks, to name a few.

Included in the studies are habitat use through baited remote camera systems, sampling and sequencing seawater for shark environmental DNA, shark behaviour and use of TCI Exclusive Economic Zone tracking and imaging technology, and aerial drone surveys to study interactions between large sharks and other large marine life.

The baited remote cameras will reveal information about depths sharks prefer and where they hunt. Sampling seawater for shark environmental DNA is a developing technique that takes advantage of the biotic material all living organisms shed into their environments, which includes their own genetic fingerprints. Two different types of satellite tracking tags will be attached to sharks (with time-degrading attachments that allow them to fall away when no longer active) to find out what areas they frequent and how far they travel. Remote observation using drones will allow the sharks interactions with other marine animals, like sea turtles and whales, so we can better understand their role in the megafauna community.

Beneath the Waves research generates data vital to DECR’s work on shark protection and management in TCI. Dr Gallagher’s team, with DECR, hosted an online Facebook live session about their work and experiences  last night on the DECR’s Environmental Outreach and Education Facebook Group.

Lormeka Williams, DECR Director stated, “It’s a pleasure to have Dr Gallagher and his research team back in TCI, especially during these challenging times. I look forward to learning about the team’s discoveries. Sharks are vital to the health of our reefs, seagrass beds, mangrove habitats, and fisheries, and as we learn about these marine neighbours, we will be better equipped to protect them and their habitats.”

It is envisioned that Dr Gallagher’s team will return several times this year to carry out the research work.