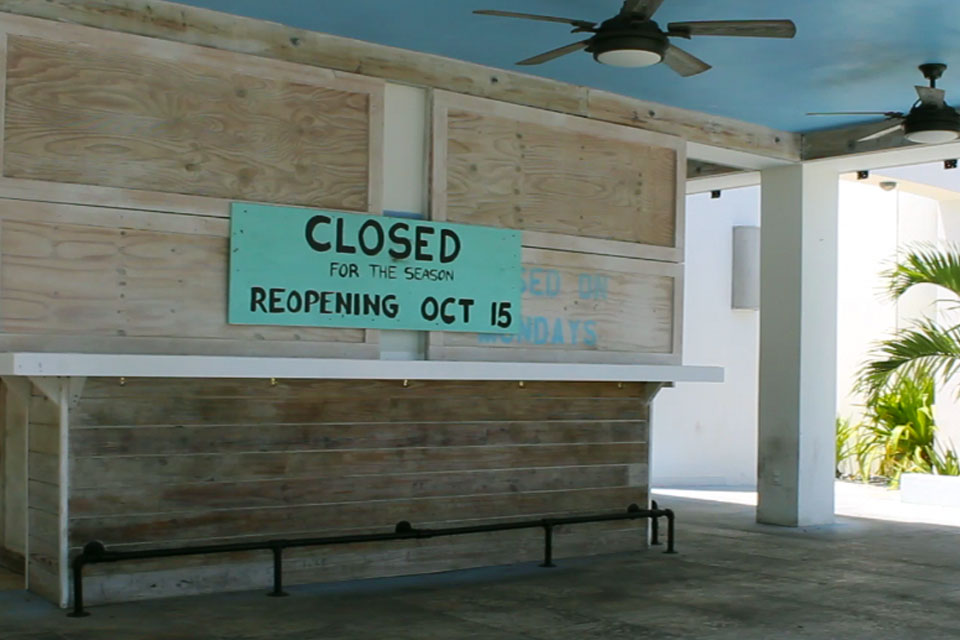 #Providenciales, Turks and Caicos – October 2, 2020 – The Turks and Caicos is now officially in a recession; it is another suffocating symptom of the coronavirus pandemic and to think, only slight inroads have been made by the World Health Organization in the effort to unravel who and what unleashed this mammoth of a crisis on the planet.

In a normal year, the Turks and Caicos Islands would have been hundreds of millions of dollars richer.

In this year, the ‘Unprecedented and Unpredictable Year 2020’, Sharlene Robinson who is Premier and Finance Minister of the UK overseas territory, has had to make a starkly different announcement about country earnings and the direct and trickle down effects due to the crushing impact on our leading industry:  Tourism.

“The trigger point for a recession is usually two consecutive quarters of negative growth. All indications are that, despite having to go on lockdown at the end of March, the country experienced economic growth in the first quarter of this year. The second quarter, undoubtedly because of the necessary restrictions which had to be imposed, saw minimal activity and even though the level of activity in this quarter was more than the activity in the second quarter, when compared with the level of activity during the third quarter of last year, we are heading towards a second quarter of negative growth. Hence we can conclude that this economy is heading towards a recession,” said the Premier on September 10 in a national press conference held at the Office of the Premier in Providenciales.

That second quarter ended on September 30 for the TCI.

It means the Turks and Caicos is now officially two days into a recession and that translates into deep losses for this once burgeoning archipelago, which expected the economy to grow in 2020 by 5.4 percent.

“In constant market prices it is forecast to decline from $303 million to 142.4 million or by $160.6 million,” informed Premier Robinson when Magnetic Media requested a dollar figure on the whopping shrinkage made known in her presentation early last month.

Overall, the Turks and Caicos Islands economy is forecast to contract by over 26 percent or $204.7 million.

During a House of Assembly meeting on August 17, Opposition Leader Washington Misick condemned the PDM Administration’s handling of the pandemic and surmised the country was facing a “deep recession.”

“The PDM does not understand what it will take to reverse the trend of this pandemic, nor the political will to try. They failed to take the measures needed between March 28th and July 22nd to put the needed resources behind the potential prevention and control of a surge of COVID-19 cases after the opening of the border and the resumption of business operations. They did not make the investment to acquire, train and undertake mass testing before the full relaxation of restrictive measures. What we should be looking at today is a reprioritisation of the budget focused on reversing the COVID-19 trend instead we are asked to approve reallocation of funding for a political agenda,” said Misick in his rebuttal of the Supplementary Appropriation Bill.

Washington Misick described the economy as being on “life-support” and the tourism industry as running “on fumes”.

And the future for travel and tourism is not looking bright.

An ominous ‘third wave’ of the highly infectious virus is sweeping the planet and the COVID-19 death toll has surpassed one million.

This confluence of crises is reviving extreme restrictions, extending barriers to travel and prompting unimagined measures to stem the flow and stop the spread of COVID-19.

New York Governor, Andrew Cuomo, on Monday signed an executive order which requires New Yorkers to quarantine for 14-days upon return from any country which the U.S. Centers for Disease Control (CDC) has listed at Level 2 or Level 3.

The Turks and Caicos, has since August 6, been charted as ‘Level 3: Reconsider Travel’.

It may be a fight in futility though, as the Turks and Caicos has faced this ‘Coronavirus Blacklisting’ before.  The United Kingdom, despite TCI being one of its overseas territories, has since August made quarantine mandatory for 14 days for anyone travelling from these islands.

Income from cruise ship travel is sunk. The CDCs ‘No Sail Order’, just hours before it was due to expire on September 30 is now extended until October 31, 2020.

Grand Turk, the cruise hub of the Turks and Caicos welcomed over 1 million cruise visitors each year but has not seen a ship in port since March.

Premier Robinson in her September 10 address announced budget reallocations to support an extended stimulus package to the tune of $5 million.

A food assistance program, a new round of stimulus payouts which would include ground transportation operators and for the first time, the National Insurance Board would financially support its contributors falling into unemployment or underemployment.

“Throughout this pandemic, TCIG has seen many policy shifts within its budget. To date, it is estimated that TCIG has paid out over $15.3m in expenses relating to the COVID-19 pandemic,” said the Premier.

The country awaits, however, activation of the new $5 million stimulus payout scheme. Details were promised for mid-September but to date government has been silent on when these funds will manifest for a people who have been in recession long before now and who fear the worst is yet to come.