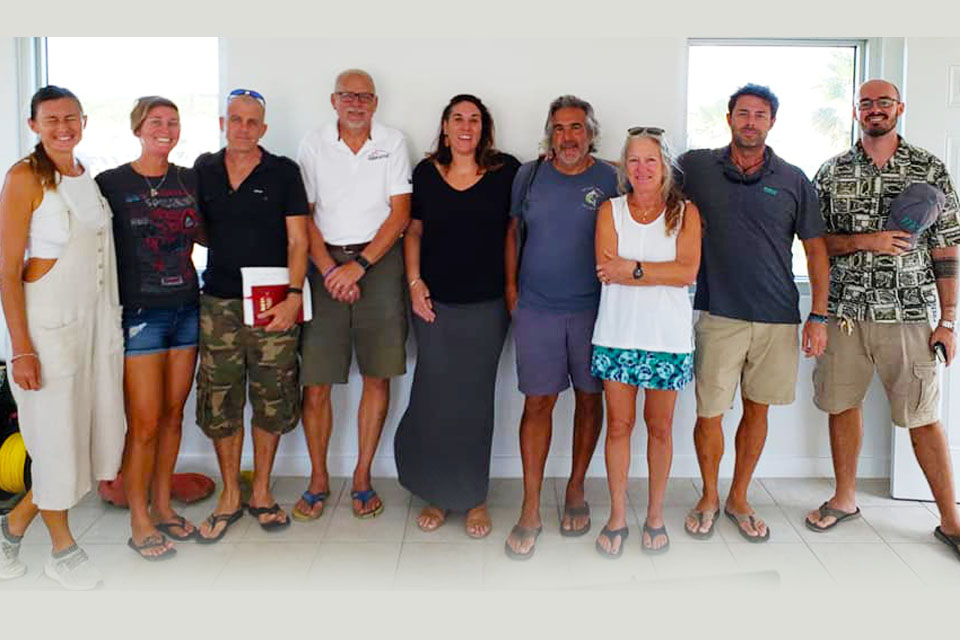 #TurksandCaicosIslands – March 6, 2020 — On February 6, 2020, the Turks & Caicos Reef Fund (TCRF) conducted it’s first training session with volunteers who will assist in fighting the deadly stony coral tissue loss disease (SCTLD).  SCTLD is a highly contagious and fast killing new coral disease that was first observed in South Caicos in January 2019, on the reefs of West Caicos in May 2019, in Grace Bay in August 2019 and on Grand Turk reefs in November 2019.  The TCRF finally received permission from the TCIG’s Department of Environment and Coastal Resources to begin treating diseased corals.

“We have our starting team of eight volunteers who are experienced divers and who have flexible schedules who can now start attacking this deadly disease,” said Don Stark, Chairman of the TCRF.  “These eight spent a day learning to identify the susceptible species, differentiate SCTLD from other coral diseases, how to prepare the antibiotic treatment and, finally, how to administer the treatment.”

The cause of SCTLD is unknown but is believed to be a bacterial pathogen.  Research in Florida where they have been dealing with the disease since 2014 have found that the most effective therapy is an antibiotic called, amoxicillin (if you have kids and they’ve ever had an ear infection, this is the most common antibiotic used to treat that problem). The antibiotic is mixed in a base (either shea butter or a special base developed by a company in Florida just for this purpose).  The antibiotic paste is then applied to the margin around an infected leision on a target coral head.  The researchers in Florida have found this approach to be between 67% and 80% effective in stopping the progression of the disease.

“Because this is a treatment done on a coral head by coral head basis, it is very time consuming,” said Alizee Zimmermann, Project Manager for the TCRF’s treatment effort.  “We are going to need more volunteers who are experienced divers, who have flexible schedules and who do not have a penicillin allergy to tackle this potentially devastating problem.  We also need a lot of eyes on the reef, so we will be conducting special training sessions for volunteers who may not fit the requirements to be one of the treaters, but who can help us gather data on the extent and progression of the disease by doing what we call “roving diver surveys.  A special training session for that type of volunteer will be held in the next few weeks.  In the meantime, we are planning our first trip out to treat corals later this week.”

Roving diver surveys are a simple technique which involves swimming in a line at a fixed depth for a minimum of 10 minutes and counting all the corals in an area approximately six feet wide.  The susceptible species are tallied as undiseased, potentially diseased, diseased, or dead.  A large number of volunteers are needed to conduct these surveys all around the TCI.  Any diver interested in becoming a roving diver surveyor should contact the TCRF at info@tcreef.org.

“We are extremely grateful to those businesses and individuals who have stepped up to the plate to help finance this effort,” said Mr. Stark.  “This is going to be an expensive proposition we are undertaking and hope that we can entice other businesses and individuals to help with donations.;  Anyone interested in donating can contact TCRF directly at info@tcreef.org or at 347-8455.”

SCTLD affects 20 species of corals that create much of the structure of our coral reefs.  These include brain corals, pillar colors and boulder corals. It is not thought to affect sponges or soft corals such as sea whips and sea fans, but these species do little to provide coastal protection or habitat for fish and other animals that live on the reefs.  When a stony coral dies from SCTLD, it begins to erode and the structure of the reef begins to decline.