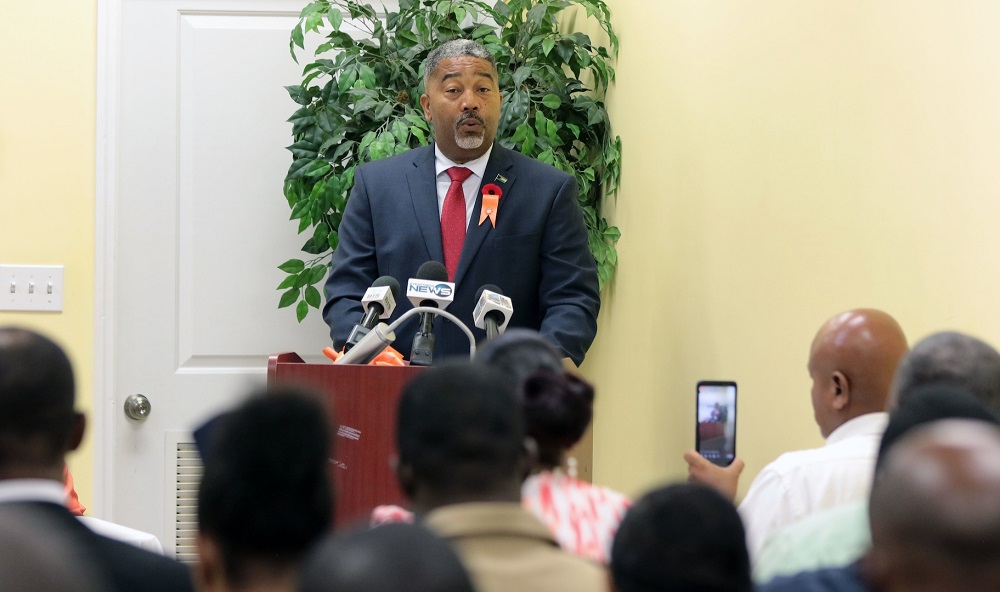 #NASSAU, The Bahamas – February 24, 2020 — Minister of Social Services and Urban Development, the Hon. Frankie A. Campbell, Wednesday refuted criticisms that there was a lack of preparation in the face of the monster storm, Hurricane Dorian, in 2019.

Minister Campbell told House Members that: “while there is always more that can be done just because we occupy the largest room in the world, which is the room for improvement, let us not take away from what has been done because we believe there is more that could have been done.”

Contributing to the Mid-Term Budget Debate for the Fiscal year 2019-2020 in the House of Assembly Wednesday, Minister Campbell said Hurricane Dorian was of the magnitude that had never before been experienced. It resulted in what Minister Campbell said became the greatest humanitarian aid and relief effort in Bahamian history.

Minister Campbell said officials at the Ministry of Social Services and Urban Development, the four Departments (Department of Social Services, Department of Rehabilitative Welfare Services, the Department of Gender and Family Affairs and the Urban Renewal Commission) and many Divisions and Units that fall under its remit (and in particular, the Disaster Management Unit) engaged in a wide range of activities months prior to the start of the 2019 Atlantic Hurricane Season – including the inspection and assessment of proposed shelters and the launch of public service announcements as part of its education and awareness campaigns.

He applauded ministry employees across the country for their commitment to preparations prior to the Hurricane Season and the approach of Dorian, and their efforts on the frontline during and in the aftermath of the monster Hurricane, and despite suffering major losses in some instances themselves.

“My level of respect and gratitude for, and towards, the staff and the team of the Ministry of Social Services and Urban Development has increased ten-fold after observing and witnessing their level of commitment and dedication – even in the face of their own adversity; even while some of them lost their own homes and had family members who were injured and/or missing. They continued to give the service that was required.”

Minister Campbell said the Ministry was called upon to manage up to 15 shelters throughout The Bahamas, including ten in New Providence, in the aftermath of the Hurricane. He commended those institutions that: “allowed us to use their facilities here in New Providence.”

Minister Campbell told House Members that the ministry’s preparations have already begun for the 2020 Atlantic Hurricane Season even as it continues to provide assistance to victims of the 2019 Hurricane.

“I assure the Bahamian people that we in the Ministry of Social Services and Urban Development are evaluating protocols, policies and procedures. We are mindful that it cannot be business as usual. We are mindful that what we faced could become more frequent and as a result, we will continue like every good sailor does, to adjust our sails and remain steadfast and agile at the helm so that we can remain on course and meet our target.

“We ask persons to continue to come forward and volunteer because the next hurricane season is upon us. We ask persons to appreciate that even as we haven’t been able to conduct a complete post mortem of Dorian because we are still living it, we are already planning for the commencement of the next season,” Minister Campbell added.