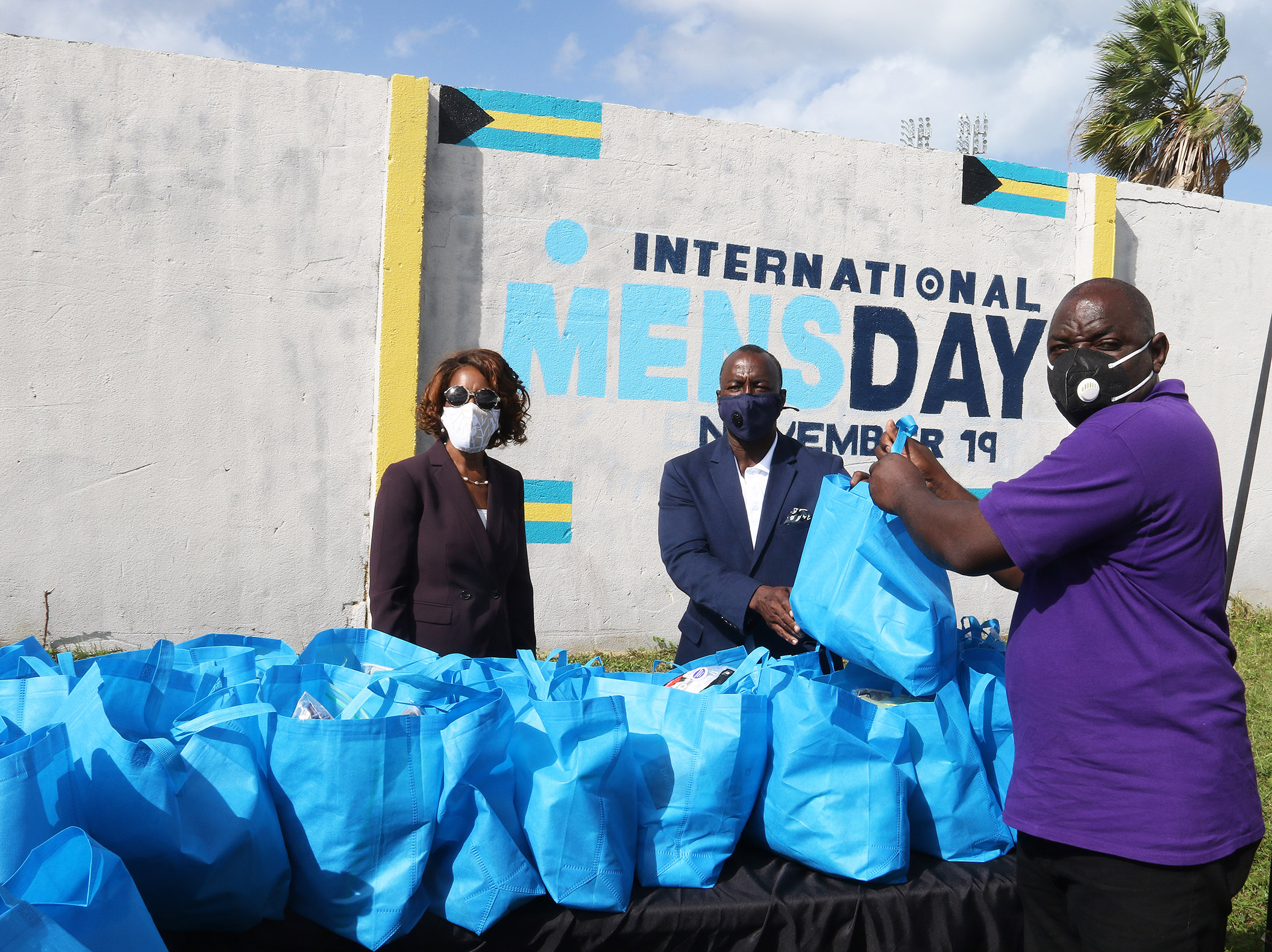 #NASSAU, The Bahamas – November 24, 2020 — The ongoing efforts to create, develop, encourage, promote and maintain long-lasting, positive and meaningful partnerships and/or relationships between men and women and boys and girls are critical to driving the nation’s continued success, Minister of Social Services an Urban Development, the Hon. Frankie A. Campbell told a limited number of persons attending an International Mens’ Day observance.

“To advance one and leave the other behind, will be to our detriment,” Minister Campbell added. Addressing the International Mens’ Day Bahamas Committee’s 2020 observance of International Mens’ Day unveiling of its new logo and mural launch at the Thomas A. Robinson National Stadium, Minister Campbell likened the nation and the importance of harmony among the sexes to a bird. (The event was held Thursday, November 19)

“I have a good friend who once told me that a bird cannot fly on one wing,”

Minister Campbell said. “Let us then think of our nation as a bird and also consider our women and girls as one wing, and our men and boys as the other wing. In order for our nation to fly and advance to where it ought to be, it is necessary, it is important, it is vital that we have fully functioning partnerships between men and women and boys and girls.

“Together, men, women, boys and girls in this Bahama Land can come together to end all forms of gender-based violence, to end all forms of discrimination, not just against women because some men are discriminated against as well, and so our job is to come together to ensure that there is equity, equality and inclusion for all Bahamians throughout the Commonwealth of The Bahama while further ensuring that we all advance and prosper together.”

Minister Campbell said the partnership between the International Mens’ Day Bahamas Committee and the Office of the First Spouse and Mrs. Patricia Minnis, was a “wonderful example” of the benefits that can be derived through the establishment of positive relationships/partnerships between men and women.

Mrs. Minnis, who attended the unveiling and launch of the logo and the mural, donated numerous gifts to be distributed by the International Mens’ Day Bahamas Committee. Minister Campbell applauded the International Mens’ Day Bahamas Committee for being one of those organizations that stepped forward to assist men of the community over the past three years.

Minister Campbell issued a challenge to the Committee. “Your work is far from done and so I want to challenge you to take your message throughout every nook and cranny of this Bahamas as this cannot be a New Providence-centric Movement.”

The Committee honored six men from across The Bahamas for their work with men and boys in their various communities.

“The persons you would have chosen to honour are from six different islands in our archipelago. That tells me that your reach and your look is not just New Providence-centric. That tells me that the positive effect that will come from your work will encompass the entire Bahamas and to me, that spells good news for the future,” Minister Campbell added.