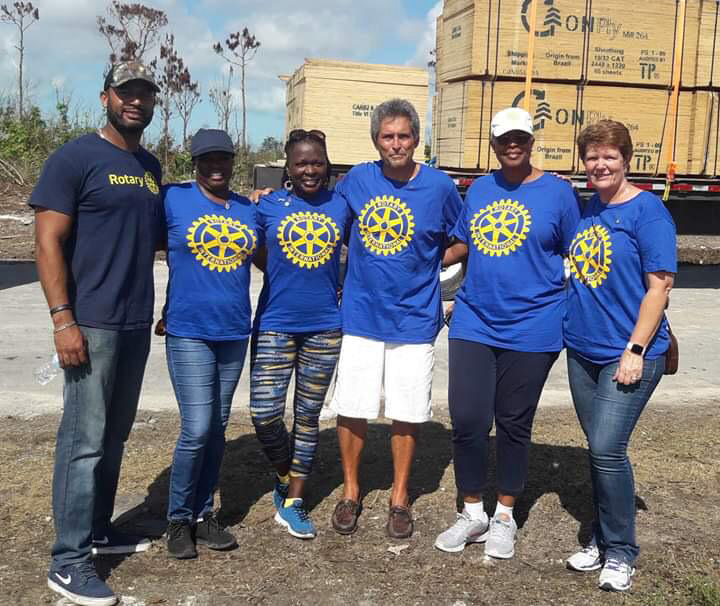 #Freeport, GB, October 31, 2019 – Bahamas – Keenly aware of the decimation Hurricane Dorian left behind on Grand Bahama, particularly over the eastern end of the island, taking with it loved ones and homes, members of the five Rotary clubs on island rode a convoy into Pelican Point last week with desperately needed building materials, generators, fuel and more fresh drinking water.

The elated and grateful residents welcomed the cavalry when the two 40-foot trailers laden with roofing and building materials and truckloads of essentials arrived.

“I’m overwhelmed with joy because I didn’t know that this day would come that somebody would really think about us enough to want to do this for us,” Ianthe Laing, a resident of 49 years said. “It is a new start, a new beginning.”

Most of the residents in the east have lost everything and a number of them, loved ones, including entire families, who remain missing after they were swept out to sea during Dorian’s raging surge.

For some, before now the road ahead seemed bleak and onerous, not knowing how and if they can rebuild with no insurance, financial aid or clue where to start. Much of the homes that remain are for the most part unlivable and camping tents erected in front of these structures act as make shift lodgings.

But with some relief in sight for residents of Pelican Point who are living out their worst nightmare, it is literally a dream come true.

“I’m so happy, I can’t even express my feeling right now,” said Elvina Bain. “I’ve been hearing that supplies are coming since the hurricane left and this is the first time that I’m seeing it.”

Bain has resided in Pelican Point all of her life but moved inland to escape the impending forecasted monstrous hurricane. When she returned a week after the storm after the roads were made passable again, she found her house was in-tact but had suffered extensive roof damage and flooding.

Now, after gutting out her home and attempting to salvage what she can, picking up the pieces to the life she and her family once knew is proving to be one mammoth task. Making their efforts all the more egregious is the sporadic downpour of rain which gives birth to a new leaky episode.

“When it rains it pours,” said Bain who has moved back home and like many others who have returned are determined to rebuild the community of Pelican Point.

It was day 51 after Hurricane Dorian left its deadly path of destruction on Grand Bahama and Abaco and that many days since the Rotary Clubs of Lucaya, Freeport, Sunrise, Sunset and Grand Bahama have galvanized into action and pooled its resources with Rotary International to bring more help and relief to residents on the island. This time, Pelican Point would be the first settlement in the east to receive building materials.

Rotarian volunteer Rich Halpern, a member of the five person central committee whose responsibilities include setting up and managing the rebuilding program said the program was initiated exclusively for East Grand Bahama.

“We’re going to be the first ones out there actually bringing them hammers, nails, sheetrock, plywood and peel and stick. We had a benefactor that came to us, no strings attached, and just said ‘I want to give this to you and I want you to use it wisely and account for it’ and it was a lot of money,” Halpern said, pointing out that it is a global relief effort and one that is giving him goose bumps just talking about it.

The second phase, he added, is to get people back in their homes.

“So the monies that we raised with generous partners like Equinor, we’re going through the building phase. Today, it’s very exciting. Two 40-foot trailers, all of those building materials, have been paid for through our generous sponsors and it’s exciting for us today with just weeks after the storm that we are here on the ground,” he said.

“Rotary, which is a service organization – all volunteers – has been working tirelessly for five weeks, some of them had similar problems with their own home but they still came out.”

Local contractors are carrying out the work and will go from house to house.

“Once everything is dried in, then we’re going to do mold remediation. Mold is a very serious issue. Everything’s got to come out of the house and it has to be treated properly and you have to wear the right mask and protective tie-back suits,” said Sarles.

After that work is completed, Sarles said they will bring in the sheetrock and before long the residents will be able to move back into their homes.

“Then we’re going to help them with airbeds and doing everything that we can to get them back and to create some sort of normalcy with their life. That’s really what Rotary is all about. We’re a service organization and our motto is service above self,” he added.

“It makes me proud to be a Rotarian to help the people and certainly Grand Bahama is in a situation that we need the help and we’re doing the best we can.”

Area Governor of Rotary 6990 for Grand Bahama Lisbeth Knowles noted that the goal is to start with Pelican Point, move to Free Town and then on to McLean’s Town.

“We’re just really happy that we can help everybody here in Pelican Point and later the rest of East End. We’ll do as much as we can with the donations that we have received so far and we are really grateful. We are trying to get as many donations in as possible because there is a lot of work to do,” she said.

Contractor Steve Laing, who is also from Pelican Point, was overjoyed to see the outpouring of donated building and roofing materials for the people of East Grand Bahama.

“This is the first set of materials to hit the ground in Pelican Point and we are so thankful because the people were so discouraged and this brings a ray of hope in [them] at least starting to put their life back together,” said Laing who was speechless when he first returned home after the storm.

“You can’t imagine the beauty of this place before the storm and the horror of this place after the storm. People who know Pelican Point, this is the cleanliest settlement on the island, but now it just lies in ruin and the folks are really in despair.”

Laing said their new reality makes one learn to appreciate the simple things in life.

“I want the folks in Freeport and the rest of The Bahamas to know that even though they are living a somewhat normal life, 95 per cent of the people in this area don’t have a home. There is no place to use the restroom, no power, no running water, there’s no restaurant, no shops, no nothing,” he said.

“In the nighttime it’s just darkness. So to have these guys come and bring these supplies it really makes us feel good.”

The Rotary Clubs plan to head back to the east shortly to take supplies into residents of Free Town.

1st insert: It was a happy day for residents of Pelican Point to witness the first delivery of building materials brought into their area by Rotary International for the purpose of repairing and rebuilding their homes after Hurricane Dorian.

2nd insert: Members from the five Rotary Clubs on island were on hand and ready to off load the desperately needed supplies they delivered for the residents of Pelican Point in East Grand Bahama.

3rd insert: Residents of Pelican Point are ready to start rebuilding their community and can now do so with the generosity of Rotary International and other private sponsors.

4th insert: Area Governor of Rotary 6990 for Grand Bahama Lisbeth Knowles was excited to be a part of the cavalry bringing in much-needed materials, generators and water to the residents of Pelican Point who were displaced after Hurricane Dorian.

5th insert: Area Governor of Rotary 6990 for Grand Bahama Lisbeth Knowles, left, and Rotarian volunteer Rich Halpern, a member of the committee responsible for setting up and managing the building program, at Gold Rock Creek just after the building materials were loaded on to trailers before heading out to deliver the goods to residents of Pelican Point