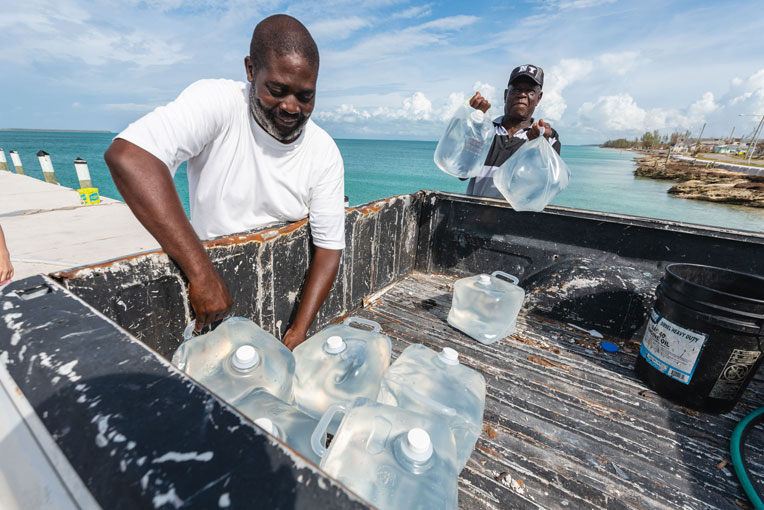 October 20, 2019 – FROM DISTRIBUTING CRITICALLY NEEDED EMERGENCY ITEMS TO PROVIDING CLEAN WATER TO CARING FOR INJURED AND SICK PATIENTS, OUR TEAMS ARE SERVING IN JESUS’ NAME.

Roland counted 15 dead bodies floating in the water the day after Hurricane Dorian finally released the Abaco Islands from its deadly grip. The storm completely flattened every home in Roland’s neighbourhood.

The restaurant where Roland worked is gone. The church where he leads Bible study and sometimes preaches is barely standing.

During the storm, Roland and his family took shelter at the church along with about 300 other people. But when the roof started ripping off and the water was almost waist high, they knew they were in trouble.

While the eye of the hurricane passed over, Roland and the group at the church fled to a nearby government building. If they had not relocated to a safer structure, Roland can’t bear to think of the likely outcome.

“God saved us. Only God saved us,” he said. “Some church members died because they didn’t evacuate. Some members, we don’t even know where they are.”

Samaritan’s Purse provided Roland and the church, which is a community distribution centre, with emergency relief items including hygiene kits, tarp, and solar lights. “Thank you for everything you do for us,” Roland said. “It’s a blessing.”

Samaritan’s Purse continues to serve families in the Bahamas more than one month after the Category 5 storm devastated the islands.

Our DC-8 cargo plane recently made its 18th trip to the Bahamas, having now delivered a total of 360 tonnes of critically needed emergency relief supplies. We are distributing heavy-duty shelter material (tarp), hygiene kits, kitchen kits, generators, blankets, jerry cans, and solar lights. We have also supplied more than 400,000 litres of clean water.

In addition to ongoing distributions from our base at Marsh Harbour in the Abacos, we are transporting emergency relief items by helicopter to numerous remote communities.

Recently, Samaritan’s Purse volunteers began working on Man-O-War Cay, one of the hardest-hit areas on the Abacos. Volunteers are covering roofs, clearing debris, and doing mud-outs at flooded homes.

Our Emergency Field Hospital also remains up and running in Freeport as our team of medical specialists provides quality treatment, including surgical care, for patients in desperate need. To date, we have seen more than 5,200 patients since the hospital opened on 10 Sept.

About one hour from Marsh Harbour is Coopers Town, where our team has set up a desalination unit for a community that had already been weeks without clean water for drinking, bathing, cooking, and washing clothes.

“We can’t do without the water. We need water for everything,” said Adella, who came to our water site several times to fill up jerry cans.

Adella rode out Hurricane Dorian at a friend’s house and they thought the terror would never cease. “The ceiling started to cave in, walls were coming apart, sheetrock was falling. The storm kept going and going and going,” she said.

On Grand Bahama Island, which lies 80-plus miles west of the Abacos, Ken Barr-Smith also hunkered down at home. As mayor of West End, the island’s capital, he didn’t want to leave behind elderly residents who weren’t able to evacuate. “I was so afraid,” Ken said. “We didn’t realise what the magnitude of the storm would be.”

Ken is grateful to Samaritan’s Purse for providing water and bringing hope to his hometown. “This is a really big help. We really appreciate it.”

Samaritan’s Purse set up our clean water tap stands on the grounds of a local medical clinic in West End. The tap stands not only serve residents, but also allowed the clinic to operate in the storm’s immediate aftermath.

“West End is a close community. I get to know patients personally,” said Dr. Alicia Genuino.

Dr. Alicia explained that many in West End were still trying to recover from Hurricane Matthew three years ago when Dorian knocked them down again. She said receiving water from Samaritan’s Purse is a huge encouragement to this struggling community.

After Freeport’s main hospital was damaged during the hurricane, we airlifted our Emergency Field Hospital at the request of the World Health Organisation and the Bahamas government.

A stroke brought Zek, a local pastor, to our hospital by ambulance as he was unable to speak or to walk. Our medical team ran tests, provided medication, and worked with Zek and his wife Judy to figure out the next steps for his recovery.

Judy explained that only the week before they had been fighting for their lives during Hurricane Dorian. The couple, along with family members and neighbours, tried to escape from their neighbourhood in the church bus.

“The water was so high the bus was starting to float, so we went to a shelter and spent the night on the second floor. It was a long, long night.”

When they returned home, Judy realised they were facing a long road of recovery. “No one was safe,” she said. “All the houses in our neighbourhood were damaged. My appliances were floating in the water.”

But they aren’t giving up. Judy is trusting God that Zek will recover and one day be able to preach again and to hold their newborn granddaughter.

Carla, another patient, also arrived not long after our hospital opened. Carla had stepped on a nail and her toe and foot were infected to the point that she not only needed antibiotics, but also several surgeries. “The nurses and doctors are amazing. They prayed with me and comforted me. They encourage you in the Lord,” Carla said.

Carla arrived at the hospital so dehydrated that our teams had to administer an IV before they could do surgery. She had been without food or water for about two days while she was trapped in her home during the hurricane.

Carla is grateful to God for saving her life and meeting her physical and spiritual needs at the Samaritan’s Purse hospital.

“Faith in Christ makes us strong,” she said. “You get through by the grace of God.”

BAHAMAS: Rotary to the Rescue