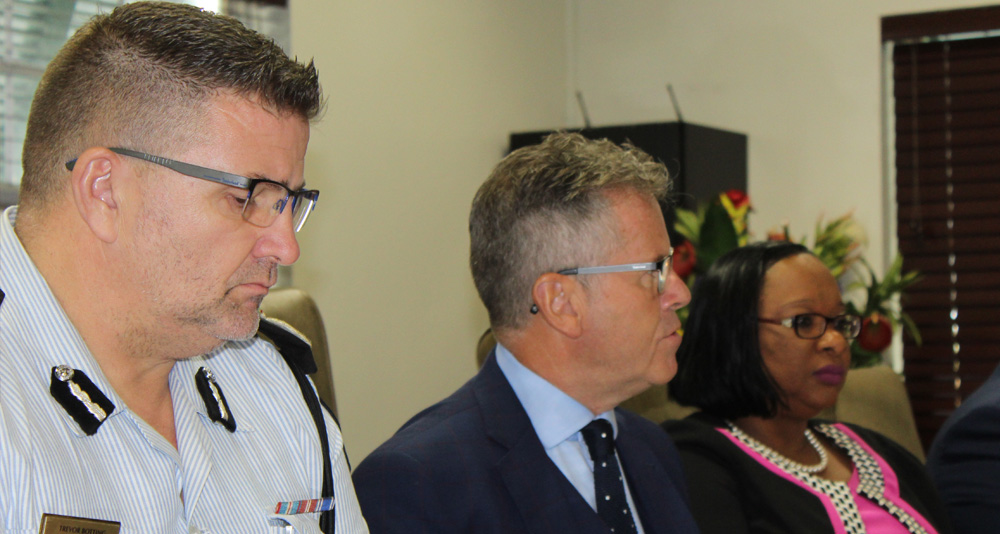 #Providenciales, September 10, 2019 – Turks and Caicos – National Security in the Turks and Caicos Islands will now reflect a tripartite-styled leadership and a news conference held this morning was the first step toward unveiling the new approach featuring Governor, Premier and Police Commissioner in a ‘one for all, all for one’ attitude aimed at curtailing crime.

Members of the National Security Council sat before the Turks and Caicos media core and social media viewers; center of screen was Governor Nigel Dakin flanked by Commissioner of Police, Trevor Botting and Premier of the TCI, Sharlene Robinson.

“The symbolism of the three of us presenting together should not be lost on you, nor on the criminals.  We have been working on this, in the background, as part of the National Security Strategy since I arrived and we had expected to explain this change of approach, when we rolled that out. But today we have the opportunity to give you a glimpse of how we are going to lead national and internal security going forward, said His Excellency, Nigel Dakin.

The governor had just spent his opening remarks focused on the victims of crimes and their families; particularly the murders so far this year which have for the first time in TCI history reached 10.

“The cold statistic of 10 murders doesn’t start to explain the impact this has on those very close to the person who has lost their life, but also on a community. And on an island, which is one extended community, a violent attack on one member feels like an attack on us all.  I speak therefore for all of us when I say we want to bring those who did this, to your loved ones, and to our community, to justice.”

The governor explained what many already know; that the trio is to be held accountable.

“Being blunt, if we can’t get it together at the top, what hope below,” he said following thoughts that the flow of information and enhanced symbiosis will be hallmarks of this new leadership approach.

“The world is now too complex for there to be institutional stovepipes and we intend to lead in a joined-up way in the expectation that others will match our behaviours and work across institutional boundaries to deliver results. Beyond that simple thought: those on the front line delivering operational impact; those paying for it; those who are held responsible to the electorate; those who can propose policy and deliver legislation, and; those who hold the Constitutional lead, including in extremis the power to call on emergency powers, or on international support, have to be working in sympathy.”

“The three of us have seized that opportunity. It’s now the new normal. Key point: every resource and power available to us can, as we wish, now be focused rapidly when and where we want it to be because we are joined up.”

Money and manpower moving more swiftly toward the abatement of crime and protection of TCI borders was welcomed news, especially since statistics show that gun crimes have soared from 25 last year to 62 incidents reported so far in 2019.

“It’s also worth saying that we believe we are dealing with a very small number of criminals – who are increasingly becoming known to us – and when arrested and charged – because there is evidence that can be put before the court – will reduce, possibly seriously reduce, the problem we have right now.”

In concluding his remarks at the 90-minute news conference held at the Office of the Premier in Providenciales, Governor Dakin issued a charge: “Finally TCI: we are bigger, we are better and we are stronger than allowing a small number of bad men, to bring fear into our amazing country.”