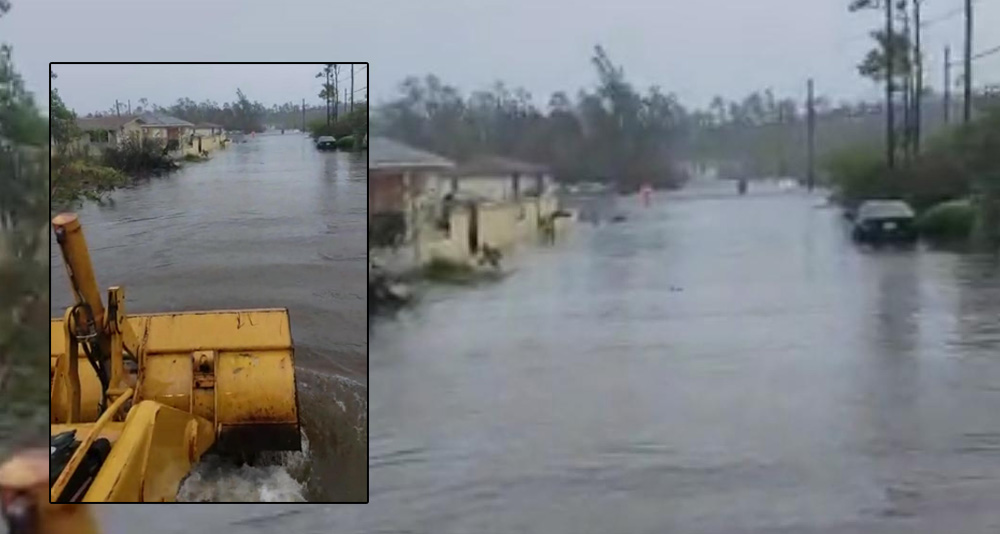 #Grand Bahama, The Bahamas – September 2, 2019 – Most of Grand Bahama Island is underwater and every hurricane shelter has been compromised by the overwhelming storm surge of Category five Hurricane Dorian, which began pounding the island since late Sunday night.

Magnetic Media has friends in Grand Bahama; many friends and family members and the reports emanating from this second city of The Bahamas were not only frightening but emotionally taxing.

“Hey Dee, this is the worse I’ve ever seen this in my entire life.  Grand Bahama is basically underwater.  Right about now, our EOC (Emergency Operations Center) is compromised we had to evacuate to the second floor.  All of our shelters have been compromised and as we stand now, it is about 12:58 and the water has travelled as far as Castaways and we still have more to go.”

The voice-note, sent via WhatsApp, got to me shortly after 4 pm today.  Tammi Mitchell, who has been working ferocious hurricanes since 1999 as a part of the disaster coordination team for Grand Bahama, time-stamped her message at 12:58 pm.

“We need whatever assistance people can get to us.  Please whatever people can do to assist us in the aftermath we are going to be calling out, anything people can bring.  This entire island has suffered.”

The images from cell phone video recordings in Grand Bahama being shared on social media were gut-wrenching.  Homes severely flooded, public areas water-logged, people walking on walls in order to escape the murky water which was up to five feet, others scrimmaging through their homes to find essentials as they planned to evacuate.  There were residents on their roof tops, car tops and everyone praying for a miracle.

Despite warnings that there would be no way to offer rescue assistance, help came.  On jet skis which were loaned to the Royal Bahamas Police Force with life jackets in order to get people out of the most dangerously compromised areas.

There were heavy-duty equipment operators who moved through the high tide which now swamped the streets.  The residential community of Arden Forest is in the eastern end of Grand Bahama and one driver is seen honking in order to get people’s attention and to get people out to safety.

Safe haven would be near impossible to find on this island which had been smashed in Hurricanes France, Jeanne, Wilma and Matthew.  Now, Hurricane Dorian, described as the strongest in modern history was crashing his surge waters into the nearby school which had been named a shelter for people in communities like Arden Forest.

Commodore Tellis Bethel informed that his troops are ready with relief supplies, a unit to provided food and technical assistance and rescue operations which includes Abaco.

Already, there are people in the Turks and Caicos Islands waiting for the green light as the plan is to come in like a different kind of flood to help Grand Bahama and The Bahamas in this time of crisis.