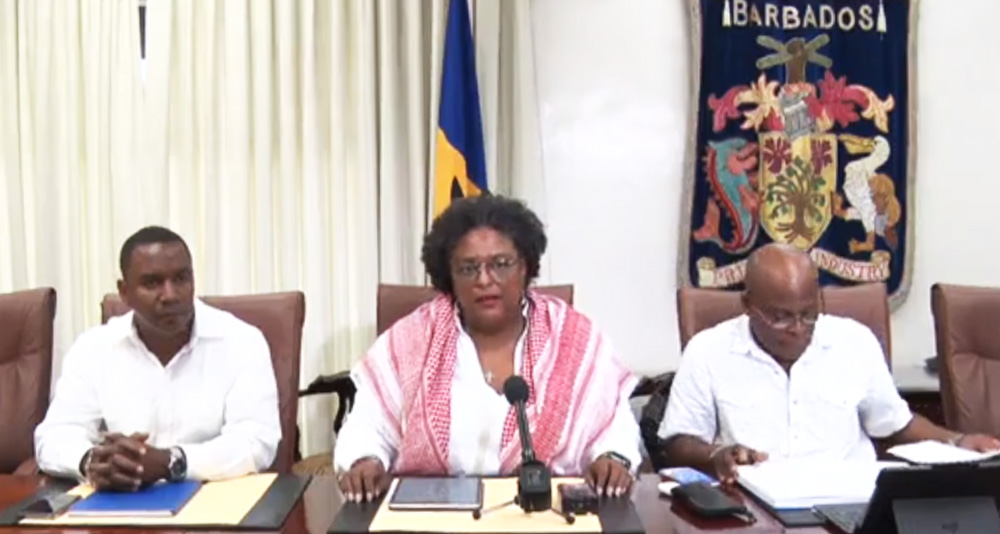 #Barbados, August 25, 2019 — Barbados is preparing for a storm surge of 6 to 12 feet as the fourth named system in the Atlantic Basin is formed and forecast to slam into the  island by Monday evening.

The country, according to its Prime Minister Mia Mottley is on ‘full, high, alert” as one of three Caribbean nations under Tropical Storm warning.  St Lucia and St. Vincent and the Grenadines were also put on the warning list today by the National Hurricane Center, based in Miami Florida.

“We expect the surf to be considerable, about 6 to 12 feet, that’s 2.5 to 3.5 metres and the Ministry of Maritime Affairs and Blue Economy and Fisheries Division has made arrangements for a haul up to take place at Pile Bay and Bay street and Port Ferdinand and Port St. Charles are prepared to take in vessels this afternoon for safe harbor.”

On Sunday afternoon, Prime Minister of Barbados, Mia Mottley addressed her country and its visitors in a 36 minute nationally televised press conference on the encroaching hurricane.  Prime Minister Mottley’s focus was on the potential of the storm to evolve quickly, debilitate country operations and cause harm to people and property.

I want to say to Badians; look, it is Sunday afternoon, it is 2:30, pause if you were sleeping, if you were eating, whatever you were doing focus on just getting yourself ready at home.  The first responsibility for yourself is by you,” with a sense of urgency, Prime Minister Mottley added, “Let us get out of the way, in the next few hours, the clean up around our house and the preparations.

We do not know if this storm will quicken and if it does, we do not know what you will be able to do in the morning if/when the reconnaissance aircraft it presents a dimmer picture than we currently have.”

At the time of the press conference, she confirmed that meetings had already happened with all key agencies and plans were mobilized for even evacuations to take place.

Some supermarkets agreed to extend their Sunday shopping hours; fishermen were asked to work immediately toward moving their vessels to safe ports and it was confirmed that generators at the hospital are in place and fully functional and established water tanks are full, with three new back-up water bladders preparing to be fast tracked from the harbor and into service as an emergency supply.

A revised shelters list will be circulated by Barbados Government Information Services and due to school still being closed for the Summer break, Prime Minister Mottley assured that if necessary, capacity can be easily expanded.

“Transport Board buses will remain operational until midnight tonight and will start back at 5 am and obviously we will ask that those who have to work late this evening, that arrangements be put in place to have workers be able to get home.  And let us use the brotherly and sisterly spirit that we need.”

Capacity of buses for Sunday was at 75 in operation, still the Transport Authority was asked to “mobilise and know immediately who are some of the private sector operators who can supplement as we go forward.”

It was shared that the public transportation has a plan in place for after the storm.

Electricity, fuel and heads of departments of Civil Service were other major issues addressed by the Prime Minister.

Hon Mottley expressed that the electricity company, Barbados Light and Power had already addressed an area of concern in Spring Garden over the weekend.

Residents in areas where pumping stations are being outfitted with new generators were advised by PM Mottley to brace for an up to 3-hour interruption in electricity as the new equipment is installed.

“The truth is that we are significantly in a better situation with respect to water generation and water tanks this year than a year ago.”

All government Permanent Secretaries, Chief Technical Officers and Heads of Department were scheduled to come in to work on Sunday to secure government equipment and files.

Police Commissioner Tyrone Griffith, at the press conference, assured that the Royal Barbados Police Force will be on duty during the storm and encouraged residents to, from tomorrow, remain indoors and to be on their best behavior.

Prime Minister Mottley added that no one is expected to be out once the ‘shut down’ is given.

Not uncharacteristic for Caribbean countries, a prayer was rendered for the safety of the Barbados.

Seventh Day Adventist Elder, Colin Jordan who is also a Barbados Government, Cabinet Minister prayed in part: “We are happy Father that you have called us to lead and to be responsible citizens in this country. We recognize that while you are in control and while you have promised to protect us, you have also said to us that faith without works is dead.  And so as we prepare for any challenge that may come form Tropical Storm Dorian, we pray that you will give us wisdom, knowledge, understanding and help us to see what needs to be done and help us to treat this matter as one that is important and one that is urgent. We pray that you will protect our country…”

Barbados has a population of 293,131 people according to the CIA World Fact Book.

﻿Tropical Storm Dorian brings ‘wet stuff’ to Barbados, all clear now given there; TCI & Bahamas urged to be storm ready by Wednesday