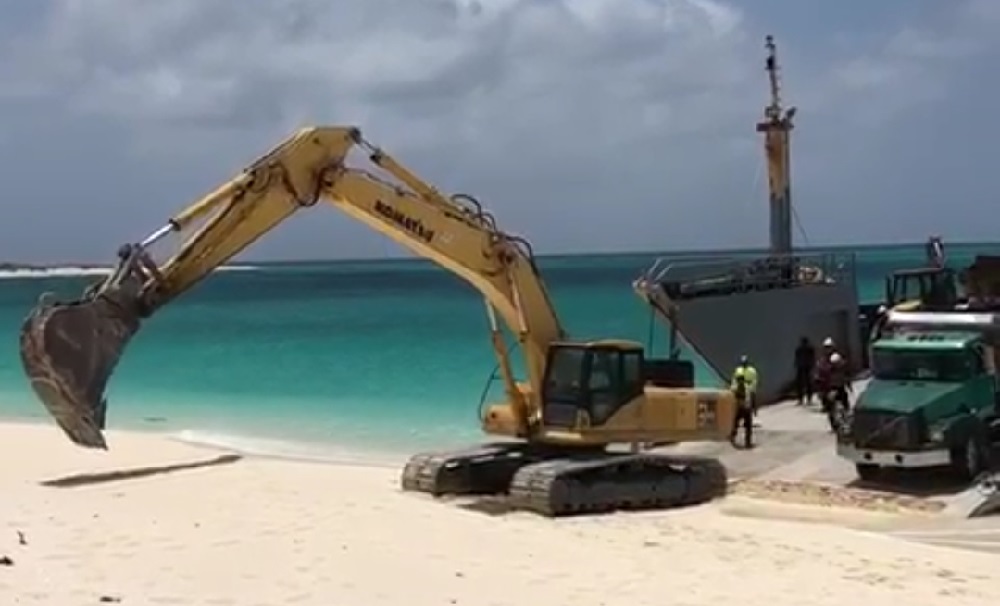 #Providenciales, August 5, 2019 – Turks and Caicos – It is being called ‘refreshing’ and declared as a ‘happy day’ with the landing – on Salt Cay’s North Beach – of heavy-duty equipment to be used in the 12-week rehabilitation project of the Salt Cay Airport.

It is a clear signal that work is set to begin promptly by Herzog Caribbean Limited on August 19, 2019 at the battered airport.

The work is commissioned by the Turks and Caicos Islands Airports Authority, which falls within the remit of the Premier.  Premier Sharlene Robinson joined the commentary on Facebook on Sunday, with “We are on our Way!”

A government notice about the project, informs that the scope of work involves:  Rehabilitating the runway, taxiway and apron underlying and pavement surfaces; Apron expansion; Pavement line markings and airfield signage; Definition of the runway longitudinal and transverse strips and safety ends; Stormwater drainage improvements; Airfield electrical improvements; and

The airline serving Salt Cay, interCaribbean Airways, issued a statement about their halted service during the refurbishment work.

“interCaribbean Airways wishes to advise travelers to and from Salt Cay of the closure of the airport for approx. 60 days effective from August 19th and ending on 17 November 2019.  During this period the Turks & Caicos Airport Authority is undertaking runway repairs and renovation requiring the closure of aircraft traffic.  Based on the repairs timeline it is expected the work is to be concluded re-open of November 18, 2019.

There is an available ferry service that is available for travel between Grand Turk and Salt Cay to enable sea access to the island.  interCaribbean will update the traveling public of any changes to the planned schedule of closure, whether earlier or later based on favorable conditions for the work to complete.”

The TCIAA adds that, “The general works will conform to the standard and recommended practices of the International Civil Aviation Organization (ICAO) Annex 14, as prescribed by the local Civil Aviation Authority.”

Photographs were posted on Sunday showing the arrival of the equipment to begin the work in mid-August.