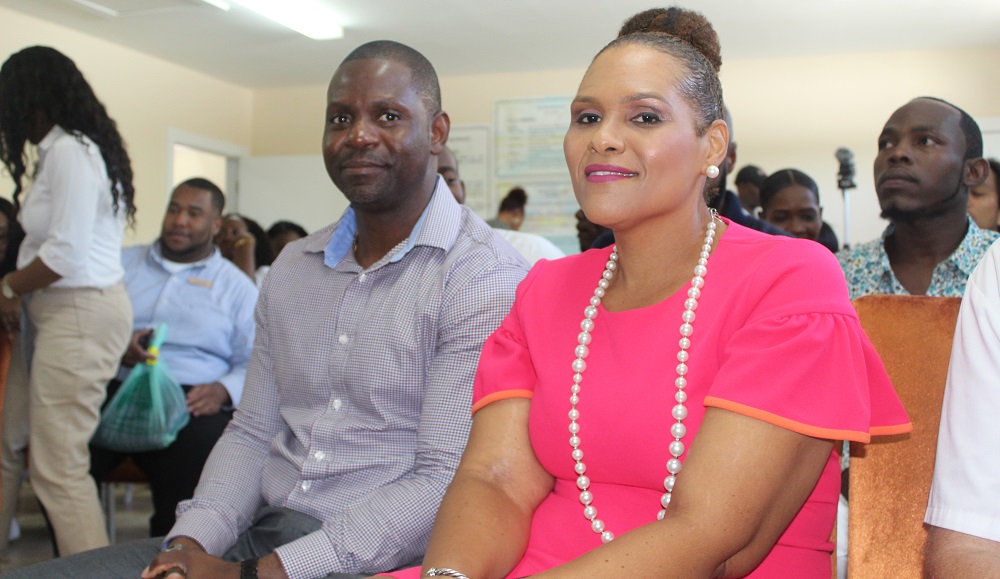 #Providenciales, April 23, 2019 – Turks and Caicos – An employee recognition event at Grace Bay Club last week Tuesday did more than highlight the stand-out performances of about a dozen team members, it welcomed a new cadre of leaders with promotions of many islanders to management positions.

A truly outstanding climb up the Grace Bay Resorts corporate ladder was that of Lindy Rigby, Turks and Caicos Island’s 2018 Star Awards winner and new member of the executive team; one of only two islanders at the helm.

Lindy Rigby is the new Director of Rooms and said, “First of all, I want to thank God and I am very humbled and grateful for an opportunity to grow within this career.  This is my fourth year at Grace Bay Club and my third promotion and you know, at this company, part of our motto is ‘grow locals within the community’ and I am so happy that Grace Bay Club is living up to that.”

In speaking about the challenges of the job, Mr. Rigby said: “You know a lot of it is just unknown, that is the challenge.  I have managed house-keeping and I have managed guest services, now I have the spa, boutique and kids’ town under my portfolio.”

Lindy Rigby is well aware of the gravity of his new role, adding that, “Rooms department in any hotel is the most high-revenue area, so most of your revenue comes from within the Rooms Department so to be able to manage the department is a great responsibility and a great honour.”

And the honour means an increased personnel portfolio too; managers and their teams all fall within the purview of Mr. Rigby.

Sheba Wilson, Group Director of Human Resources is a Turks and Caicos Islander and said that she is happy to have indigenous company at the executive table.  Wilson, in speaking to media explained that Lindy Rigby’s addition was earned and strongly undergirded by his ability to galvanize those around him to deliver excellently as well.

“I am really confident in his ability; every position that he has held with us he has been stellar.  Lindy Rigby believes in developing the persons around him and his team is all Turks and Caicos Islanders; in his management, all guest services managers are Turks and Caicos Islanders and we are proud of that accomplishment,” said Sheba Wilson, Group Director of Human Resources – GBR

After a mere four years at Grace Bay Resorts and the result is beyond anything Rigby set out to do when he joined the team, and Wilson underscored the feat his promotion represents.

‘Lindy Rigby now sits on the senior leaders’ team; that’s our executive team at Grace Bay Club.  And for me I am elated about that because for many years we didn’t have Turks and Caicos Islanders sitting on that team. I am a part of that team and to have another Turks and Caicos Islander join me on the team, I feel happier about his promotion than I did about my own. We are certainly breaking barriers and it paves the way for more of us to be able to hold those types of positions.”

Lindy Rigby is a Telly Award winning television producer of Turquoise Morning, he has worked in media at WIV, TCI New Media and at PTV.  Rigby returned to hospitality in 2010, initially at Beaches Resort Villages and Spa before joining Grace Bay Resorts.

We congratulate Lindy on this amazing feat… we always knew you could do it!