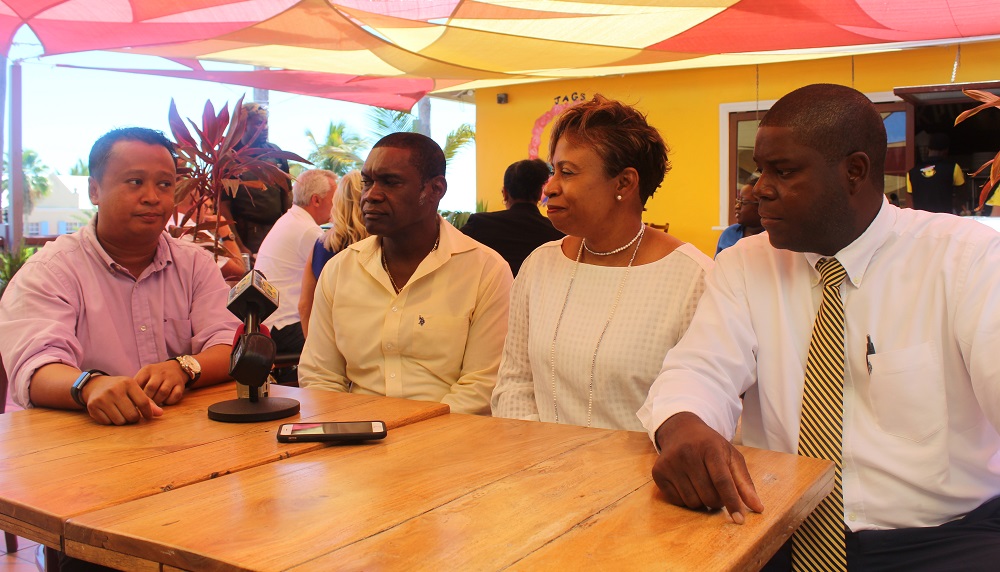 #Providenciales, April 9, 2019 – Turks and Caicos – It is already being touted as the opportunity of a lifetime as top local chefs are about to jet off to Singapore and their suitcases will be packed with the flavors of the Turks and Caicos Islands.

“It is a privilege of ours that we are invited to World Gourmet Summit in Singapore and it is largest Food and Wine Festivals globally and for us to be extended an invitation to showcase the culinary skills of the Turks and Caicos, in particular that of Chef Nik and Chef Meredith, who will be carrying the team over there, we are very proud for the Turks and Caicos to be featured on the global scene again,” said Tony Garland, Wine Cellar & Co-founder of Caribbean Food & Wine Festival.

Media was this morning welcomed to a tasty presentation of the Master Chef menu which the culinary team intends to dish out at the World Gourmet Summit, happening April – May in Singapore.

The organisers of the Caribbean Food and Wine Festival – Grace Bay Resorts and the Wine Cellar were joined by the Turks and Caicos Hotel and Tourism Association and the TCI Tourist Board for the announcement today at Crackpot Kitchen at Ports of Call, Grace Bay, Providenciales.

The TCI to Singapore team will include Chef Nik Skippings, TCIs Culinary Ambassador; Chef Chris Meredith of Grace Bay Resorts; the 2017 Caribbean Jr Chef of the Year, RobinAngel Simons and from the Turks and Caicos Islands Community College, Kevin Misick.

Both Misick and Simons were nurtured in their culinary craft in the TCHTA Hospitality Adventure or Lil Chefs programme; Stacy Cox, TCHTA Executive Director will journey to Singapore with the team and is elated at the selection of professionals representing the Turks and Caicos Islands.

Stacy Cox, TCHTA Executive Director said, “…after booking your accommodation, people book their dining experience and for us to be able to take a part of Turks and Caicos to Singapore with our Hospitality Adventure, Little Chef ‘babies’ is something that is unimaginable to an extent and again that would not be possible without the support of the team from the Caribbean Food and Wine Festival.”

And this experience will lend well to an ever-evolving luxury experience said the TCI Tourist Board Director, Ramon Andrews.

“What we are doing is redefining the culinary aspect of the Turks and Caicos.  Leading in the Caribbean they way that we are leading when it comes to a luxury product, this is something that is very very important.  Not only to the destination but we are taking the Community College and local chefs along because we don’t just want to go and experience Singapore, we want to bring Singapore back to Turks and Caicos,” explained the TCI Tourist Board Director.

Mr. Andrews reminded that Singapore is the number one rated culinary destination in Asia. The event is described as a ‘Gastronomic Parade in Southeast Asia’s premier haute cuisine festival’.  The Turks and Caicos team leaves later this month.

Next time we tell you about the showcase of Chef Nikita Skippings and his Master Chef menu and how the Turks and Caicos earned the prestigious invite.