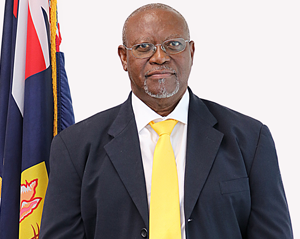 #Providenciales, April 11, 2019 – Turks and Caicos – The former Chairman of the Progressive National Party, PNP is today criticizing the Cabinet Shuffle of Premier Hon Sharlene Robinson; challenging capability in two cases, questioning non-promotions in another even suggesting that one minister strong-armed her party leader.

Hon Royal Robinson issued a video message on social media, and said in part: “Two things that I am particularly interested in.  One is that the Minister for Infrastructure, the Deputy Premier; what is he gonna do with respect to these changes in projects to make sure that they can come through the cut and be of benefit to the people of the Turks and Caicos Islands.  Is he up to the task?”

Hon Sean Astwood, as announced by Premier Robinson will say farewell to the Ministry of Border Control and Employment and move into the office of Infrastructure, Housing and Planning on May 8, 2019 when the Cabinet changes take effect.

The PNP’s Appointed Member to the House of Assembly is also quizzical about the new Minister for Immigration, Citizenship, Labour & Employment, (formerly the Ministry of Border Control & Employment) Hon Delroy Williams and whether he has a plan to competently cope with the plight of illegal migration.

“Is he going to put in place some new policies, plans and programs to stop the sloops from coming into the Turks and Caicos Islands.  Is he prepared to make sure our borders are safe?  We will see; they say the proof of the pudding is in the eating.”

Hon Robinson said he was disappointed the Member for Cheshire Hall & Richmond Hill, Hon Doug Parnell was not elevated.  There was attention brought too, to the PDM Appointed Member.

In his comments, there was a bold statement about the Education Minister, Hon Karen Malcolm who will remain unchanged in the shuffle.

“One would look at the Minister for Education and some would say she was going to be on the chopping block, but my understanding is that she and her people read the riot act to the Premier and in so doing the Premier backed down and so she continues to perform as the Minister of Education.”

He said it is nothing more than an attempt by Robinson to sow discord when he should be concerned about his own party.

Hon Royal Robinson wrapped up his two-and-a-half-minute message with, “But in the end ladies and gentlemen, we will see we will see if this change has been for the benefit of the Turks and Caicos Islands or just window dressing and show.”

TCI: PDM hits back, says PNP ex-chairman should focus on his own party