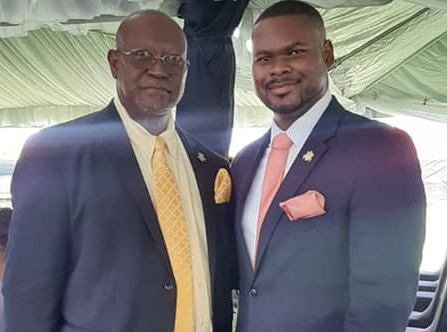 #TurksandCaicos, April 27, 2021 – Royal Robinson believes the election reputation of the Turks and Caicos is at stake and those who threaten to bring the stable system of fairness and accountability into disrepute should be made to leave office.  He fingers the elections’ supervisor Dudley Lewis and the Attorney General Rhonda-Lee Braithwaite Knowles in a no holds barred statement issued Friday.

“The nonsense at the Elections Office must stop and Mr. Lewis, it’s Supervisor, should go. If the AG Knowles is found not to have acted in good faith, then she too should go too. This entire matter is a travesty of justice, Human Rights, fair play and integrity in office.  That this charade, dereliction of duties and not being accountable is taking place in this beautiful place that I call home, is contemptable,” said Royal Robinson, a former government minister for the Progressive National Party.

The statement backs up his son, newly elected all island member Jamell Robinson who has for weeks been trying to get the Elections Office, he says, to sort out a blunder of addition in the Bight.

“In regard to the my overall vote count being incorrectly reported, I can confirm that this is indeed the case as my correct total was 3,500 votes. Specifically, in the Bight District the total shortfall was 82 votes because the 3 polling station returns were not added up correctly.

The issue was flagged with the Elections office in sufficient time to make an immediate correction or at the very least to have it addressed in the Elections Report which is required by Section 57 (5) a) of the Election Ordinance. Institutions of Good Governance must carry out their functions with Integrity or be made to do so,” said Hon Jamell Robinson, who won one of five All Island candidate seats in the 2021 General Election.

The Attorney General’s Chambers responded to the TCI Sun Newspaper only; saying Robinson should have filed a petition to order a recount of the votes in The Bight. However, Jamell Robinson explained he did not need a recount, he only needed the correction of figures which had already been tallied and agreed by agents for each political party.

Mr. Robinson also contends, he was never advised that a Supreme Court petition was the only want to rectify the discrepancy he reportedly brought to the attention of the Elections Supervisor on election night.

“As a member of the voting public, I believe this is an issue relevant to all Turks and Caicos Islanders. Mistakes do happen, but we have to be willing to do the right thing, learn from them, and adjust for the future. This is not a challenge with the PNP and as I made clear on the campaign trail, the PNP is ready for the work that needs to be done and I am honored to serve as part of the governing party that will lead us through these unprecedented times,” shared the younger Robinson.

Royal Robinson, known as a spitfire and who is also Jamell’s father said he intentionally stayed out of the matter until now; at this point he is speaking and standing up for what he claims is a wrong against his son.

“There was clearly a mistake in adding the votes from the tally sheets from the three polling stations for The Bight on election night, Friday, 19th February, 2021. Coincidentally, I was the counting agent for the third room, and so was Hon. O’Neil Delancy. The numbers were agreed to by all parties in that room and the final sheet was taken to the person in charge of that Constituency. It was somewhat past midnight on election night, when the tally was finished. The tally sheets from each room were given to the Returning Officer and it was just a matter of adding the votes from the three rooms for each of the candidates that appeared on the ballot. The votes garnered by each candidate from each room was not in dispute.”

The Elder Robinson said the 82 people who wanted their votes to be counted for Jamell Robinson should have their vote counted as such.  He believes the Elections Supervisor failed in his constitutional duty.

“It was not until after 7pm, on the day that a petition to the Court for redress, if necessary, that Mr. Lewis wrote to Hon. Robinson stating that he had to file a petition if he wanted the ballot boxes to be opened to see what had happened. Mr. Lewis knew full well that the window of opportunity for that was now closed. However, prior to Mr. Lewis writing Hon. Robinson that nonsense, on a visit to Mr. Lewis’ office by Hon. Robinson, the Supervisor of Elections showed Hon. Robinson a document with the corrected number count for him for The Bight Constituency,” explained Royal Robinson.

The AG’s Chamber disagrees that Supervisor Dudley Lewis did anything wrong; they back the Elections Office in its handling of the matter.

“The Hon. AG cannot feign ignorance of the matter as she was copied in on ALL of the correspondence to Mr. Lewis.

The rationale that they are trying to use is that he won and the PNP won, so what is the big deal? According to US Vice President Joe Biden: “it is a BIG F…ING DEAL”!  Just look at what happened in the 2016 Elections, Hon. Misick beat out Mr. Robbie Been Jnr by only 21 votes for the fifth spot. Therefore, 82 votes is indeed a very a big f…ing deal!”

At this point, the elder Robinson shared that the matter has gone to the Governor as the Elections Office falls within his remit.

The Elections Office has not replied to Magnetic Media questions on the matter.