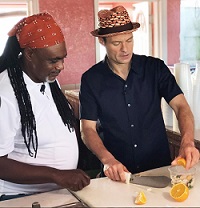 some fun in the sun in The Islands of The Bahamas during Live with Kelly and Ryan.  Hundreds of resort visitors and locals were in the audience as the top-rated daytime show in the U.S. focused its cameras on the spectacular weather and culture of The Bahamas.  Beyond the enthusiastic audience on set, four million viewers will see the unique Bahamas stories that the show put together.

Kelly and Ryan ventured out to experience Bahamian food and the island hopping lifestyle, that were showcased in fun segments including:

Over four days, the show included special guests like Whitney Cummings, Arie Luyendyk Jr., Heather Graham, Nene Leakes and Taylor Kitsch and others, who all boasted about the beauty of The Bahamas.

Executive Producer Michael Gellman has been to The Bahamas four times with the show and said there is no question why they keep coming back.

“We always have a great time here. The show is beautiful with the blue water, palm trees and wind and people are always hospitable and have been from the first time. So now that’s why 25 years later it is our fourth time visiting,” he said. 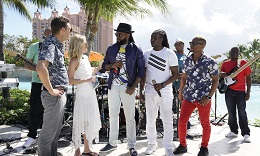 “[Live with Kelly and Ryan] being here always has a tremendous impact. It’s us experiencing the destination.  It’s not just like an ad.  You are seeing us experience it and seeing what The Bahamas has to offer is really special and people respond to it.  There has been great feedback and we have people who follow us on all our remotes and now they go on vacation with us. But I think the bigger impact is after we leave.”

When the first show aired live on February 5, there was already a social media reach of over 4 million.  Executives of The Ministry of Tourism and Aviation are overwhelmingly happy for the show.  Director General of Tourism Joy Jibrilu said the immeasurable exposure from the show is welcomed.

“As we near the key travel booking season, the Ministry sees this four-day broadcast with a major daytime television show as an amazing opportunity to expose viewers to the diversity of The Islands of The Bahamas,” said Joy Jibrilu, Director General, Bahamas Ministry of Tourism and Aviation.  “To have Kelly and Ryan showcase our natural beauty and authentic culture with their millions of viewers during an unusually cold winter in the U.S. is priceless.  We are confident that seeing their favourite TV hosts enjoying all that we have to offer and talking about our different islands will inspire viewers to take a trip to The Bahamas to experience it for themselves.”

Roots Junkanoo Group kicked off the first show of the week, Da Rhythm Band made their live television debut as the house band on Tuesday, and Baha Men promoted their new summer jam “Bumpa” on Wednesday’s show. Kelly called the Jam “A hit”.

Baha Men is made up of the group members Rick Carey, Dyson Knight and Marvin Prosper.  “Twenty years later, this was an awesome experience for us,” Carey said. 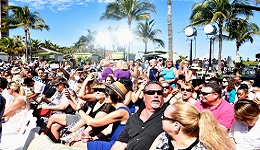 “We are excited and we are sure it is going to be hit like Kelly said,” Prosper said. “We are looking forward it coming into the summer.”

“Everyone is excited to be here and they had good feel music to go with the experience and it all just came together and that is what is going to make ‘Bumpa’ a really good hit.”

The live and taped shows are the culmination of an integration that has included broadcast promotion, a sweepstakes and social media from the show that are already driving interest in the destination.