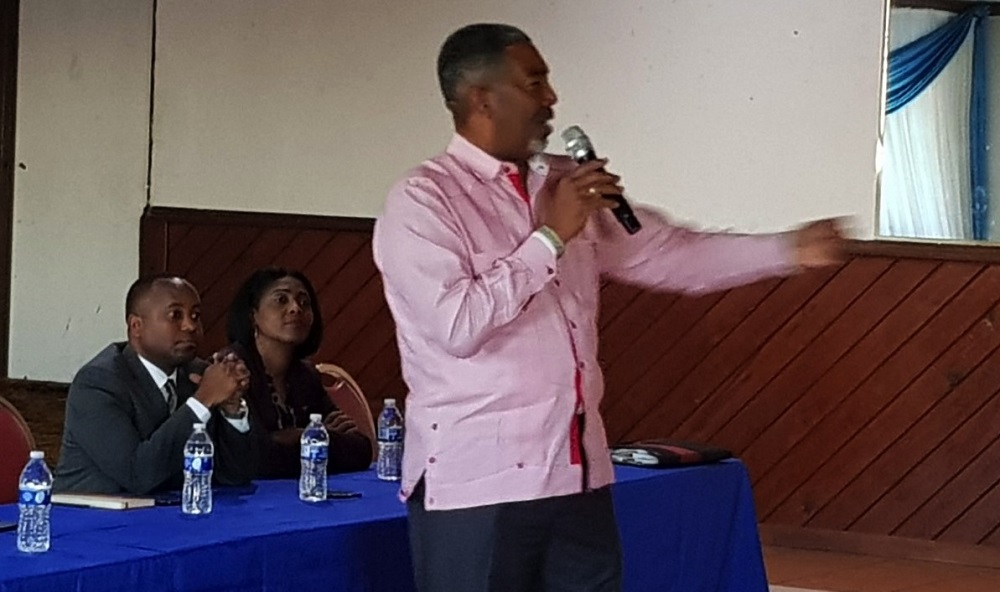 #Bahamas, November 1, 2017 – Grand Bahama – In what could only be described as a frank, open and honest meeting with taxi cab drivers in Grand Bahama, Minister for Transport and Local Government, the Hon. Frankie Campbell addressed a number of serious issues facing cab drivers in Freeport.

From the hot button topic of the contention between cab drivers and tour operators at the Freeport Harbour, to the issues surrounding taxi plates and franchises, to an issue as simple as cab drivers keeping their vehicles clean, the Transport Minister was not shy in addressing all of the challenges being faced by taxi drivers in Grand Bahama, during a special called meeting at the GB Taxi Union Hall on Thursday, October 26, 2017

However, in spite of the past and present challenges taxi drivers must contend with on a regular basis, Minister Campbell assured them of one thing — that the public transportation system in Grand Bahama, as it relates directly to cab drivers, has to be dealt with as an overall effort to fix the whole of Grand Bahama.

“Grand Bahama is a very important part of the puzzle of The Bahamas,” Minister Campbell told cab drivers who had gathered at the GB Taxi Union Hall. “And as far as taxi drivers are concerned, I realize that you too play an important role in the economic sustainability of this island, because tourism being the major driver depends on all participants to play their role to ensure that the tourist experience is one that will result in repeat visitors.

“Our goal and objective as a Government, is to ensure that as quickly as possible we increase the size of this pie, so that there are sufficient slices so that everyone can get a slice of the pie, and that the hustling which I know for a fact exists in the industry will decrease somewhat and you would be in a better position to sustain your livelihood comfortably.”

Minister Campbell addressed the issues surrounding the leasing of taxi plates, noting that the whole idea of leasing a taxi plate is not necessarily the legal framework of how it is or how it was intended to work.

“Set criteria implied that it was intended that a person would have a taxi plate or a franchise to be an entrepreneur and to be able to look after his or her family,” noted Minister Campbell.   “However, as time went on, some children inherited these taxi plates and franchises and many of them never drove a taxi in their lives, but had gone on to become doctors and lawyers and other professionals, but since they had the plates, they leased them out at a very high cost.

“It has become what I call modern day slavery, because those who are leasing the plates pay the Government $100 a year for the plate, but charge a driver $500 per month to use the plate.   I don’t think that’s fair and I am convinced that it is the major cause of the hustle that goes on with taxi drivers.”

As far as finding a solution to this problem, the Transport Minister said that he could take the easy way out by giving out more taxi plates, but noted that in the long run this would only exacerbate the problem and make the hustle among taxi cab drivers even more severe.   Instead, Minister Campbell said that he has instructed the Road Traffic Controller to provide him with an audit of every taxi, bus and public service plate that has been issued thus far in The Bahamas, specifying information on who has those plates, where they are located and what is being done with the plates.

“After that audit, I will make a certain determination and I will be prepared to live or die by that determination, as long as I get the support of the other members of Cabinet,” said Minister Campbell.   “This will affect the entire Bahamas at one time and I will make the decision in good conscience.”

Minister Campbell slightly tugged at the major bone of contention among Grand Bahamian taxi drivers, which has always been a battle between cab drivers and tour operators at the GB Harbor.   In trying to understand the issue, Minister Campbell noted that as far as he knows a tour is a pre-arranged journey, which means it is something that is not done on the spot, but something that has been arranged before that tourist took the cruise.

“So Mr. Controller, Enforcement Officers, it is wrong and illegal, according to the Road Traffic Act, for persons to try and sell those tours on the ground,” said Minister Campbell.   “Don’t get me wrong, I admire the tour drivers, I admire the effort they put into their profession; many of them advertise their services on the internet and attend expos abroad to promote their services.   But at the same time, I’m disappointed that taxi drivers cannot come together under one umbrella and advertise their services on that same internet.

“Taxi Drivers, you have an awesome responsibility if you would stick together.   There is a certain unity necessary for the kind of success you are looking for.”

The Transport Minister then opened the meeting for questions from taxi drivers and allowed them to present burning issues for which they hoped the Government could assist in helping to find solutions.   Aware that one meeting would not suffice in fully dealing with the myriad issues that face GB taxi drivers, Minister Campbell promised to follow up with more such meetings between himself and GB taxi drivers.

SPEAKING WITH CAB DRIVERS – Minister of Transport and Local Government, the Hon. Frankie Campbell took time from his tight schedule, October 26, 2017, during a visit to Grand Bahama to speak with Grand Bahama taxi drivers at the Taxi Union Hall. Minister Campbell addressed a number of issues that GB cab drivers face and promised to return for further discussions. Looking on is Minister of State for Grand Bahama, Senator Kwasi Thompson and Parliamentary Secretary in the Office of the Prime Minister, with responsibility for Information and Communications, Pakesia Parker-Edgecombe.