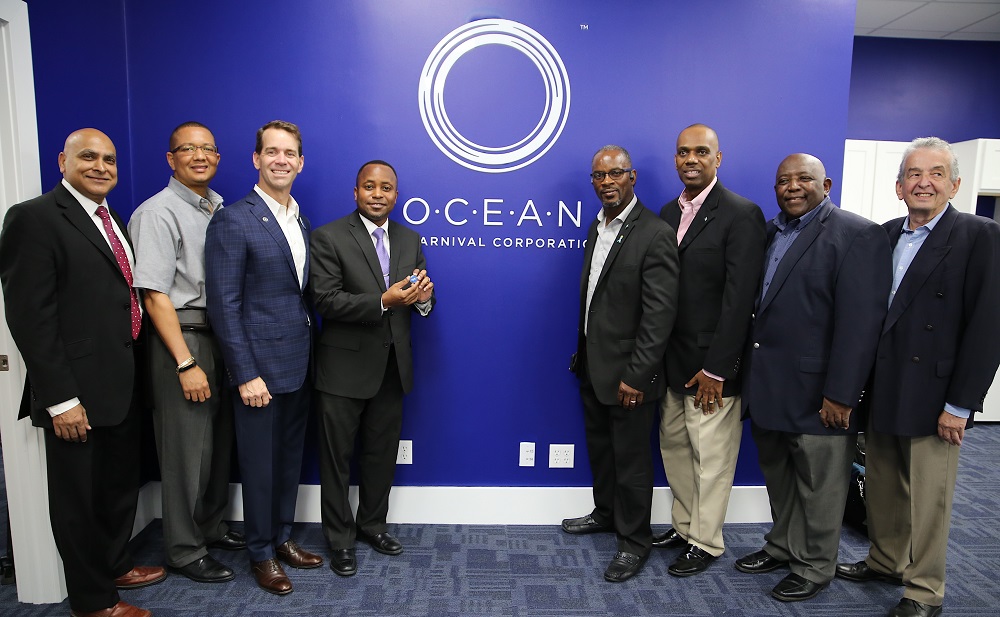 #Bahamas, October 14, 2017 – Grand Bahama – Minister of State in the Office of the Prime Minister, Senator the Hon. Kwasi Thompson expressed excitement for the opportunities available for the island and its residents as a result of Carnival Corporation’s Ocean Medallion Project, during their soft opening on Friday, October 13.

Describing technology as the future of Grand Bahama which is happening now, Minister Thompson added that he is very excited about Ocean Medallion.   Ocean Medallion is a wearable device designed to enhance the overall cruising and service experience of the passenger. It enables a personal digital concierge for passengers, eliminating long check in lines, cabin keys and credit cards.

A detailed description of Ocean Medallion and what the Freeport facility will do was given by John Padgett, Chief Experience and Innovation Officer of Carnival Corporation and Marcelo Freire, Director, Global IT PMO Guest Experience and Innovation of Carnival Corporation, to Minister Thompson along with other senior officials from government, the Grand Bahama Port Authority and the Grand Bahama Chamber of Commerce.

While making a statement to the media immediately after, Minister Thompson said, “This Ocean Medallion project is the first-of-its-kind wearable device that enables a personal digital concierge by bridging the physical and digital worlds (technology) to deliver a new level of personalized service not previously considered possible.   With this type of interactive technology, not only does it change the cruise industry but for Grand Bahama, it diversifies our economy, allowing aspiring entrepreneurs and small Bahamian companies to take advantage of these opportunities. 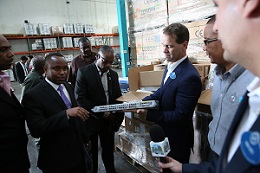 “Through our Business to Business Initiative industrial corporations and others like The Grand Bahama Shipyard and Buckeye agreed to open their inventory and purchasing needs to the small business community.   This opportunity was used to empower businesses to be able to supply those needs at a better rate or faster delivery service.

“Further to this, Bahamian companies such as the GB Shipyard and Freeport Ship Services have taken advantage of this opportunity to do business with Carnival Corporation.   Grand Bahama is positioned as the perfect fit for industry and innovation where industry connects with technology.”

With the government’s focus on Grand Bahama becoming an offshore technical hub, the advanced technology of Ocean Medallion is welcomed as it is playing an integral role.   It is anticipated that eight to 10 Grand Bahamian IT/Electronic Technicians will be hired and trained to assist with programming and installing the Ocean Medallion systems onboard Carnival’s fleet.

According to Minister Thompson, in rebranding the island for industry and technology, the GB Tech Summit will be launched next week.   The tech summit is expected to attract some of the best and brightest, including Bahamians who are making strides worldwide.

“The message our government wishes to articulate to the innovation team at Carnival and all of the technology companies who are a part of this project, Hughes Systique Corp you are truly welcome and we believe this is only the beginning of any exciting and prosperous partnership.”

The government believes Grand Bahama has the potential to be the Silicon Valley of the Caribbean, said Minister Thompson, and hopes to empower the island through foreign direct investments, particularly those investors needing IT engineers, technicians, specialists and project managers on the ground to monitor and manage their projects.

“I assure you, the government is focused and committed to simulating the local business environment because a healthy and strong Grand Bahamian economy is vital to the growth and development of the entire Bahamas.”

TOURING THE FACILITY – Minister of State in the Office of the Prime Minister, Grand Bahama, Senator the Hon. Kwasi Thompson, was on Friday taken on a tour of the newly established tech facility of Carnival Corporation where they are assembling their state-of-the-art Ocean Medallion. This device is expected to enhance the cruise experience by providing a more personalized experience for passengers. Minister Thompson is seen discussing some of the networking equipment with: Rev. Frederick McAlpine, Chairman, Hotel Corporation of The Bahamas; Iram Lewis, Parliamentary Secretary in the Ministry of Works; John Padgett, Chief Experience and Innovation Officer, Carnival Corporation; and Ian Rolle, President, Grand Bahama Port Authority.  (BIS Photo/Andrew Miller)