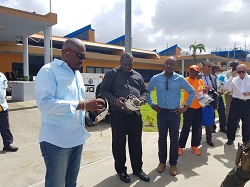 #Bahamas, October 4, 2017 – Nassau – There was criticism for the delegation from The Bahamas which went to Dominica on Monday for an official tour of the damage to the country which was pounded by Hurricane Maria last month.    Senator Fred Mitchell said the group was too big, citing times when the PLP Administration would take similar sized contingents and be slammed for it by the then opposition FNM.

While some Bahamians sounding off on social media agree with the PLP Senator, they chided him for daring to cry shame on Prime Minister, Dr. Hubert Minnis.   PM Minnis took his foreign affairs minister, Darren Henfield; his immigration minister, Brent Symonette; the Director of NEMA, Capt Stephen Russell,  President of the Bahamas Union of Teachers, Belinda Wilson and Bishop Dellon Fernander of the Bahamas Christian Council.