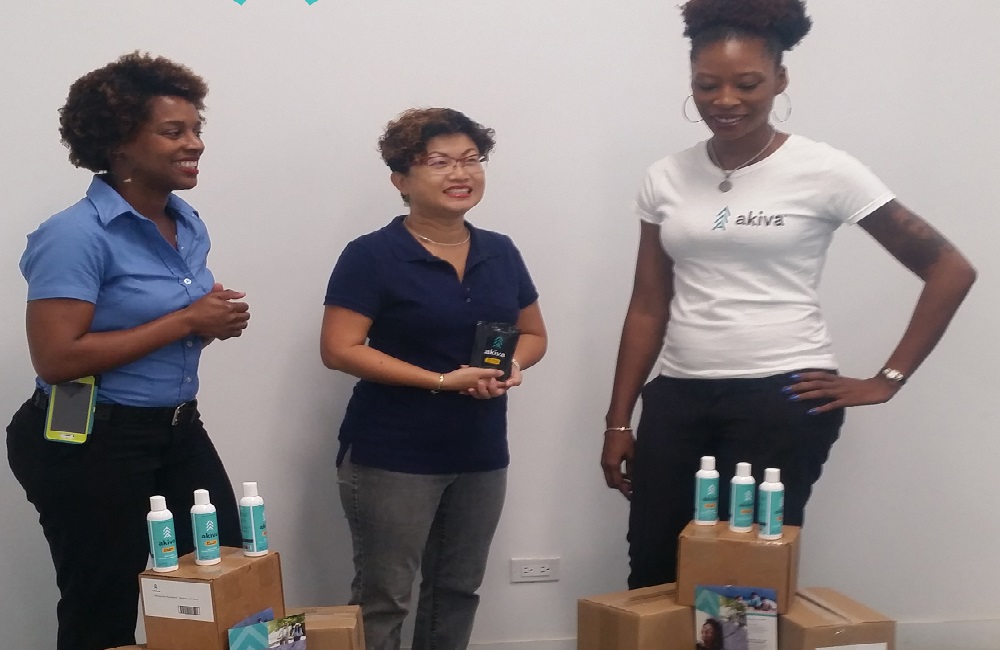 #Bahamas, October 1, 2017 – Nassau – Long after the TV cameras have gone, well before lights are back on and life returns to normal, standing water left behind in hurricane-ravaged islands will help breed mosquitos that can deliver deadly diseases.   On Tuesday, a company with a conscience stepped up to take the sting out of the threat.

Livful, the Atlanta-based developers and manufacturers of Akiva Mosquito Repellent, announced a matching donation of non-toxic wipes with the power to last 16 hours.   Akiva wipes will be distributed weekly to the islands impacted by Hurricane Irma weekly through NEMA and HeadKnowles.

“The Bahamas is very close to our hearts.   We chose to launch Akiva here and we’ve been welcomed into the homes, playgrounds and resorts on these beautiful islands,” said LivFul CEO Hogan Bassey.   “In the aftermath of a hurricane, mosquitoes breed.   During a rebuilding period, people must be protected from the mosquitos that deliver diseases like Zika, Dengue and chikungunya.   Plus, we understand that mosquitos on those islands are a tremendous nuisance. We’re praying for a speedy recovery for The Bahamas and we’re doing what we can to help.”

For every 3 bottles or packages of Akiva’s single-use wipes purchased from Lightbourn Trading on Tonique Williams-Darling Highway, LivFul will match the purchase with a donation of wipes.   Lightbourn will deliver the donation to NEMA and HeadKnowles every Friday for distribution to the islands along with other supplies.    The campaign will run through October 13.

“We are very grateful to Livful which is demonstrating what it means to be a social entrepreneurship enterprise,” said Captain Stephen Russell, Director of NEMA.   “Now that we are beginning to re-inhabit the islands and people are returning to their homes, it is important that we tend to some of the needs they may not even recognize as urgent, like protecting them against diseases spread by mosquitos.”

Bassey knows all too well what the impact of mosquito-borne disease can mean.   He spent two decades experimenting with formulas to keep people mosquito-safe after suffering from malaria repeatedly in his native Nigeria by the time he was 10.   The final formula was the result of cooperation with the University of Georgia where Bassey studied.   The product became available in The Bahamas in June and response to it has been nothing short of phenomenal, reflecting what was learned during official testing.   Arm-in-cage tests showed Akiva’s effectiveness lasted up to 16 hours keeping 200 female, buzzing biting mosquitoes at bay.

“As residents return to the southern islands, their focus will be on making sure they have a safe place to sleep, that their roof is repaired and essential services are in place,” said HeadKnowles volunteer Patrina Khoo Farquharson, who received the first cases of donated wipes Tuesday.   “But also, the mosquitos are a tremendous nuisance.   The responders on the ground – Royal Bahamas Defence Force and Police Officers, volunteers – are literally under constant attack by these ‘monster-sized’ blood-suckers.   This donation from Akiva will go a long way toward protecting the people of the southern Bahamas from mosquito-borne disease and the misery of relentless attacks.   We are very appreciative and hope everyone will rush down to Lightbourn Trading and make their purchase while the campaign is on.”