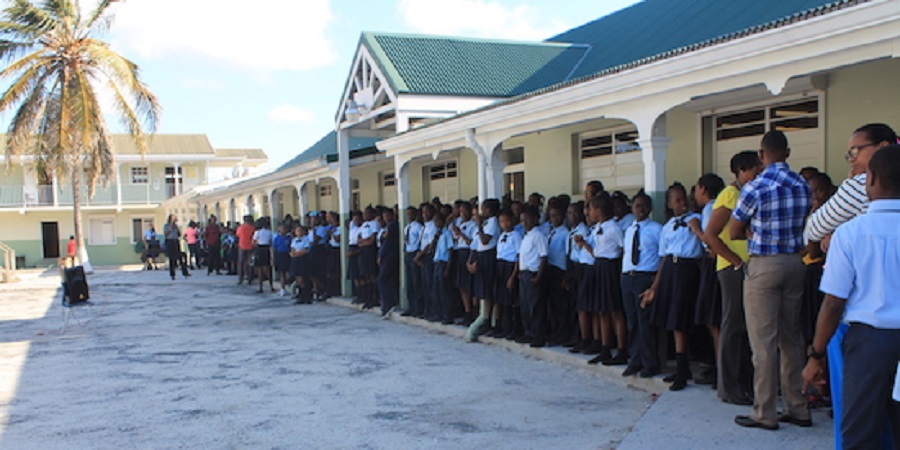 #TurksandCaicos, September 28, 2017 – Providenciales – As a result of the passage of hurricanes Irma on 7th September and Maria on 21st September, 80 percent of public schools suffered damages affecting approximately 4,014 students.  Immediately following the passage of the storms, the Government engaged the services of a local engineering company as well as an international engineer NGO group – UK SARAID to conduct a detailed assessment of the structural integrity of all public schools.    The degree of damages to public schools ranged from minor to severe, but all were certified structurally intact.

However, given the extent of the damages in two of our schools and the potential noise impact associated with the construction environment coupled with the potential risk to our students, the Government decided to relocate all students from the Oseta Jolly Primary and the Eliza Simons Primary  into alternative temporary locations.

Providing a safe learning environment is paramount and returning students to a state of normalcy by getting students back to school is a priority of the Government.  We appreciate that parents have been very understandable during this difficult time and we ask for your further patience.   The Government devised a three-prong approach which will be implemented simultaneously to return our students to school.

As can be appreciated, the senior students such as Forms 4 and 5 in the high schools and the Grades 5 and 6 in the primary schools should be preparing for examinations. As such, it is critical to return these students to the classroom.   Priority will be given to these classes in schools which were heavily impacted.

While these students are settling in their schools, the Ministry of Education will continue with the needs assessment and fine tune its plans to usher the remaining students into school within the following week(s).   This would entail, but will not be limited to, completing minor repair works to existing infrastructure at the schools thus making more classrooms available, or finalizing plans for alternative spaces for our students.

The Government is beginning the process of reprioritizing its capital programme, and in many cases has already commenced the repair work in all impacted schools, with the vision to rebuild stronger, better schools.   The Ministry of Education will remain engaged with parents throughout this process and provide continuous updates directly and via the media on progress being made to fully return our students to a state of normalcy.

In keeping with the strategic approach outlined above, and acting on the recommendation from the Director of the Environmental Health Department, the following public schools throughout the Turks and Caicos Islands will be open to the specific classes of students as of Monday, 2nd October 2017:

Recognising that many students and their families may have suffered great personal loss, the Ministry of Education is relaxing the wearing of uniforms for the remainder of Term 1.   Parents are expected to ensure that their children are appropriately dressed.