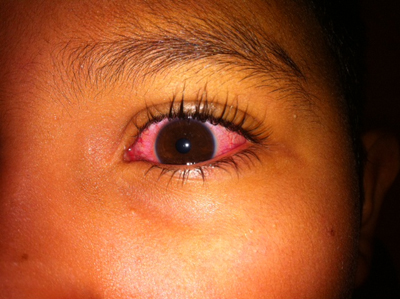 Bahamas, June 13, 2017 – Nassau – The Ministry of Health is advising the public of an increase in conjunctivitis also known as “pinkeye” in the Bahamas within the last four weeks. Cases have been presented in New Providence as well as cases noted in migrants from cruises in New Providence, Abaco and Eleuthera during assessments conducted by public health staff.
The last major outbreak of pinkeye in the Bahamas was in 2003 with a record 6387 cases. In 2016, there were 895 recorded cases.
June 2017 has so far seen 139 recorded cases, a staggering jump from 101 cases reported in May this year.

The contagious disease is caused by a bacteria, virus or chemical irritation. Symptoms include redness, swelling, itching, a watery or “pus like” discharge, resulting in sensitivity to light and blurred vision.
It is easily spread from one person to another. To prevent the spread, persons are encouraged to do the following:
· Practice frequent hand washing
· Keep your hands away from your face
· Change your pillowcase and towels daily
· Avoid shaking hands with others
· Avoid sharing products such as make-up, and wash cloth
· Stay away from work, school and public places until the infection clears

All cases of Pinkeye should be reported to a Health Care Provider.