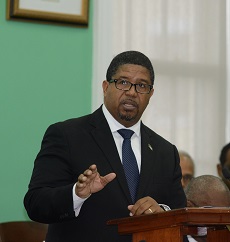 Bahamas, June 14th 2017 – Nassau – Once again the newly-elected government has revealed more debt and challenges left for them by the former administration. This time, Deputy Prime Minister and Minister of National Security, Peter Turnquest has reported that the government is now faced with $150M of collateral calls left by the previous Christie administration.

That is to say, that during their 5-year tenure, the Christie-administration made calls/demands to banks or other financial institutions to request collateral and/or payment for debt/loans/contracts they needed to have funded. Collectively, these were in excess of $150M and not repaid, thus leaving the new Minnis-administration in a risky fiscal position.

Consequently, Turnquest revealed, “The Government is now required to provide a minimum of $70 million by the first week of July to meet this collateral call.” During his contribution to the 2017/18 Budget Debate in the House of Assembly last Wednesday, Turnquest also reported that the total outstanding payments of The Bahamas Treasury was $161,283,514.04.

The Deputy Prime Minister also stated, “The Ministry of Finance was partially successful in negotiating temporary waivers but the obligation has not gone away.” He added that the figure owed may increase in the event of any further negative ratings action.  As a result, Turnquest admitted that employees and vendors have had to wait an “inordinate time for payment.”

However, despite Opposition Leader Phillip Brave Davis’ initial questioning of the Government’s decision to borrow such a large fund, Turnquest said he was grateful that they have decided to accept this position, explaining “the emergency borrowing authority was the only prudent thing this administration can do to protect the financial reputation of The Bahamas.”