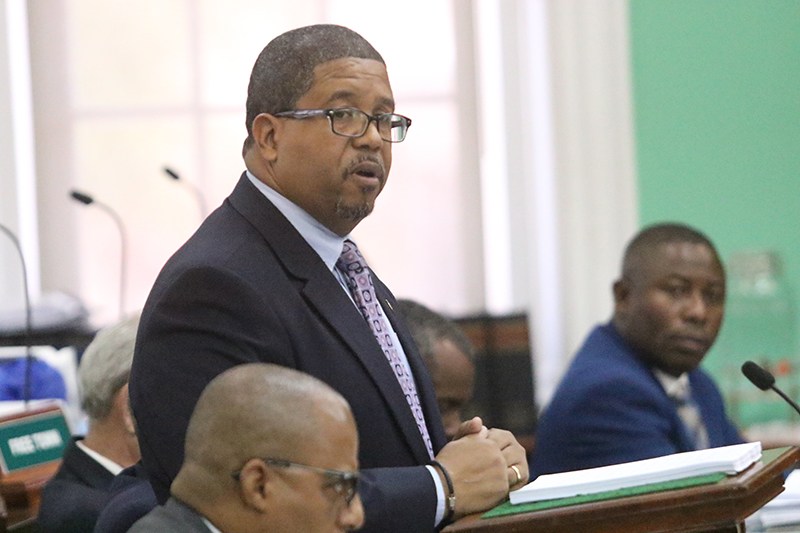 #NASSAU, Bahamas — January 30, 2020 — Deputy Prime Minister and Minister of Finance the Hon. K. Peter Turnquest explained that the Government is presenting the extraordinary and unexpected fiscal impact of Hurricane Dorian as a Supplementary Budget, so that the Bahamian people are made fully aware of exactly how the Government intends to address the challenges which have emerged.

As he presented the Supplementary Budget Statement in the House of Assembly, Wednesday, January 29, 2020, DPM Turnquest stated that the supplementary appropriations outline both the expected revenue losses arising from the Hurricane together with the increases in the recurrent and capital expenditure allocations necessary to deal with the emerging restoration and rebuilding activities on the islands of Abaco and Grand Bahama.

“The Supplementary Budget Book provided to this Honourable House presents the expected revenue loss for this fiscal year, by the respective revenue categories, which underlay the adjusted revenue budget for FY2019/20; it details the additional capital and recurrent expenditure arising from Hurricane Dorian, as well as several other policy imperatives.  As these impacts are multi-year, the medium-term forecasts have been extended by one year and revised through to FY2022/23.”

He noted that in circumstances like this facing substantial revenue loss and significant new expenditure requirements, governments are compelled either to raise additional funds through greater taxation – or through increased borrowing in the near term.   “The Government has determined that additional taxes would not be optimal at this time, given the substantial impact of Dorian to our economy and the need to maintain private consumption levels.   Accordingly—and very conscientiously—the government has decided to fund the revenue loss and expenditure requirements through additional borrowings.

“Thus, I am also tabling a new borrowing resolution for authorization to borrow beyond the $72.4 million (which excludes the $628.0 million for refinancing of maturing debt) approved at the time of the 2019/20 Budget Communication in May of last year.”

He said, “As I mentioned during the tabling of the 2019 Fiscal Strategy Report in November, we anticipate that total revenue for FY2019/20 will now be reduced by $232.6 million, due to revenue losses and revenue foregone from VAT, Business Licence fees, Customs, and a number of other taxes in the Hurricane-affected islands.”

DPM Turnquest stated that it is important to remind the House that given the magnitude of the impact of Dorian on the islands of Abaco and Grand Bahama, the Government unveiled an unprecedented package of tax incentives and concessions as a key part of the establishment of the Special Economic Recovery Zone (SERZ).  I know that members opposite agree—like all Bahamians—that this was and is the right thing to do.

“However the impact of those much needed tax concessions for those island mean that over $200 million in tax revenues is being deliberately and consciously foregone.  This is being done so that the government is doing as much as it reasonably can to aid the speedy recovery and restoration of those impacted communities.

He added that given the total incremental spending that the Government will have to undertake to initiate rebuilding and restoration efforts, we anticipate that total expenditure will increase to $3,073.1 million for FY2019/20, in comparison to the $2,765.0 initially budgeted and approved.

The DPM explained that recurrent expenses are projected to be higher by $157.6 million, bringing the revised estimates to $2,687.6 million.  Of this total, approximately $82.7 million is associated with Hurricane Dorian, which include:

He said, “This spending has and will facilitate a number of social assistance measures on the Government’s part.  For example, the Government has aided with rental assistance to evacuees from both Grand Bahama and Abaco, provided accommodations to hurricane victims by way of shelters, food assistance to victims outside of the shelters, and has also extended its national lunch benefit to displaced students that relocated to schools in New Providence. In addition, the Government is seeking to expand the National Insurance Board (NIB) unemployment benefit to 26 weeks from 13 weeks to eligible persons that have been impacted by the storm.”