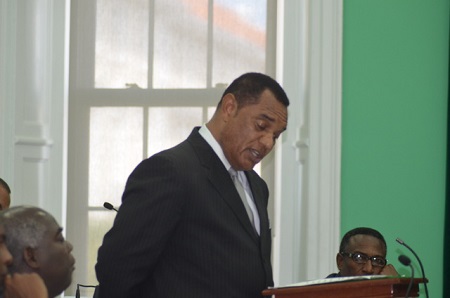 Nassau, Bahamas, February 3, 2017 – VAT money goes into a Consolidated Fund and that, explained the State Minister for Finance, Michael Halkitis is why it is hard to report specifics on spending related to Value Added Tax.   Still, during House of Assembly debate Wednesday, the Finance Minister stepped in and stepped up when he announced that he has directed his office to get moving on a full report on VAT.

Prime Minister Perry Christie, telling the Bahamian poeple from Parliament he is doing it so that nobody has to ask, ‘Where the VAT money is.’   PM and Finance Minister, Mr Christie said, “show that when we reduced duty as we did, 40 percent of the VAT money would go to compensate for the reduction of duties and other taxes, another 30 percent would go, that is 30 cents of every dollar, to debt reduction, I think, Mr. Speaker.”

That is however not what Halkitis said at the PLP Convention; a breakdown of spending included school construction, improvements to the Princess Margaret Hospital, on defense at sea, the coming National Health Insurance and even planes for Bahamasair were listed by the MP for Golden Isles.