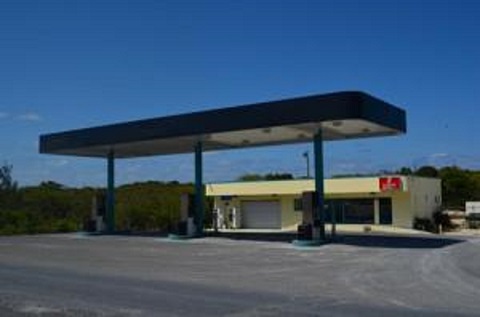 Providenciales,  TCI, July 5, 2016 – Two men are still on the loose after shooting an officer in her leg yesterday just in front of Petro Plus Gas Station in Blue Hills; and according to the Police report the shooting could have been so much worse.

The tactical unit was not called to the scene, some of its officers just happened to be in the area right after two masked men robbed a woman at the gas station of her purse with cash and other valuables.  They ran off and it was as they were darting across the road; that the tactical team saw them and began pursuit… the men reportedly fired at the police vehicle and that is when officer D’Krizia Missick was struck in the leg.

The bullet went through the rare left door and could have more seriously injured the officer.  Woman officer Missick is expected to make recovery and Police want to know what you know if you were in the area when the armed robbery occurred.  Call crime stoppers anonymously at 1 800 TIPS, that’s 1 800 8477