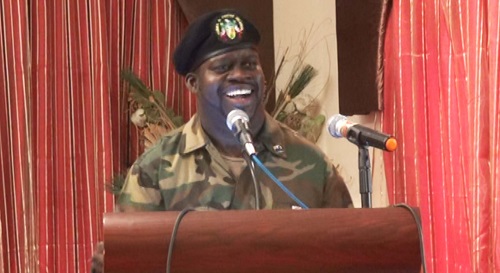 Providenciales, TCI, October 1, 2016 – Just Another Soldier is the mantra and the acronym for Jas Walkin of North Caicos who on Thursday officially announced that he is going at large as an independent candidate and that his move is more about change, than it is about winning in the next General Election.

“I have found that too many Turks and Caicos Islanders have been let down by simply a change in government, what we need now is a change in governance, so I can garauntee you that as an independent member of parliament, that I will affect change, and the first thing that i’m going to do is, I’ve never hide this from this country, my desire and my vision for this country is to help  coalition government, and i’m gonna do everything that I can to run with that kind of government.”

Jas was introduced by his wife, the ceremony guided by his sister and it happened at the Occasions Ball Room at Airport Hotel with a healthy audience in support, cheering him on.  Some were dressed in army fatigues, as was Jas complete with a military beret.  “Because the one thing this country need is just another soldier, so those are the people that I expect to go to the poll.”

It was an impressive roll out and included Walkin’s first manifesto, he said; that document in booklet form is called The TCI Road to Success, and Jas said it gives his vision of a Turks and Caicos built without crippling and costly shortcuts.  The announcement by Jasmin Walkin came at the 40th anniversary of a transition in TCI Politics brought on by the country’s only national hero, the late Right Excellent JAGS McCartney.